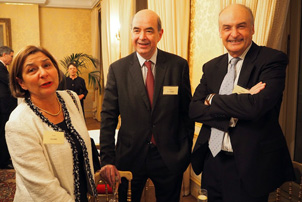 An estimated 50 Chase alumni, spouses and friends attended a cocktail party at the elegant Cercle de l’Union Interalliée on March 16, 2015.

It was the first activity for CAA Paris in some time and organized by Jean Louis Gleizes.

If you know of Chase alumni in the Paris area who were not at the event and might be interested in future such events, please send their names and e-mail addresses to CAAParis@aol.com