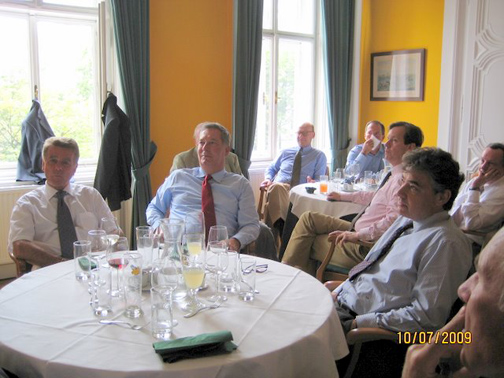 For news of more recent events:

The Vienna Chapter held its summer luncheon on Friday July 10, 2009, at the St. Johann’s Club. Originally it was planned that Heinz Hilgert, Chairman of Westdeutsche Landesbank, would join us and give an overview on the German banking landscape. Due to Heinz’s unexpected resignation in early June, Manfred Kunert offered to speak  about the Austrian banking situation instead.

Manfred, who recently retired from the management board of Österreichische Volksbanken AG, gave us a very interesting and sobering view on banking in general and his concern about the continuing lack of trust amongst bankers.

This year´s Thanksgiving Dinner in Vienna was hosted by Gerlinde and Wolfgang Fenkart-Fröschl on Friday, November 21, 2008, with 32 alumni and spouses/friends attending.

Hungary was prominently represented with Charles and Catherine Kovacs and Albert Royaards and Eva Czaky-Bornemisza finding their way to Vienna from Budapest. Special thanks to Ossi and Gisi von Goertz for joining us and also Gustav Dressler, who had a few days before becoming a father again; his wife, Ulli, also wanted to come, but was unfortunately prevented due to the snowy weather.

It was also  a pleasure to see Sylvia and Gerhard Eisenburger.  No, despite the photo, they have not remarried but are just good friends ! We were particularily pleased to welcome Rosemary and Wilhelm Bruenner, Peter Forster and Karl Schweizer, whom we had not seen for a while.

The Vienna Chapter celebrated new wine and visiting alumni at an evening event at Heurigen Welser on September 12, 2008.

Guest of Honor was Tony Walton, who came to Vienna on the occasion of the SIBOS Conference. Unfortunately, it was not the "usual" Tony we know, due to bad food poisoning he picked up in New York!

We were also happy to welcome Andreas and Aline Lieven from Frankfurt, who were passing through Vienna to travel to Romania, and Ed Münzberg, who specially came from his home near Edinburgh.

The next Vienna Chapter Event will be a Thanksgiving Party on Friday, November 21, 2008, beginning at 6:30 pm, at the home of Gerlinde and Wolfgang Fenkart-Fröschl. Please RSVP by November 14 to Fischi at e.fischer-fischi@aon.at.  See the events listing for additional details.

Andreas gave an overview of the general banking market, in particular relating to CEE countries where Erste Bank, under his leadership, has achieved a dominant position in several countries. In his opinion, the CEE Region will be affected less by the current financial crisis compared with other areas in the world.