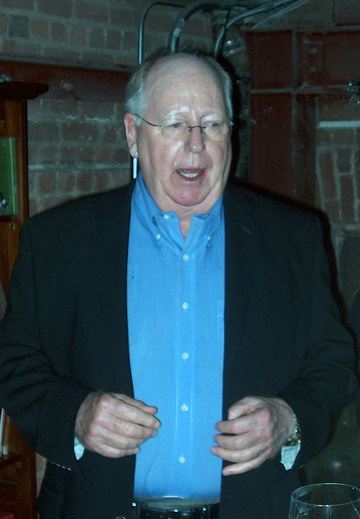 The San Francisco Bay Area chapter of the Chase Alumni Association welcomed in summer with its second get-together of 2010 on Tuesday evening, June 8, 2010 at Sens Restaurant, just a few feet from the Embarcadero Office Complex where Chase opened its first West Coast offices in the 1970s. "Each time we look at the Jean Dubuffet sculpture just below the restaurant in Justin Herman Plaza, we are reminded of our heritage," writes Chuck Adams, the chapter coordinator.

There was a strong turnout to hear Hans van den Houten, CAA co-founder and chairman emeritus, speak to us about our organization, its global activities, the upcoming Dutch elections (scheduled for the day after our event) and some of his view of northern European sentiment about the euro.  Beside some excellent observations, there were plenty of entertaining and thought-provoking anecdotes to illustrate and reinforce the points of Hans’s presentation.  The attendees later broke into informal groups for discussion, networking and political gossip.

Thanks go to our Chase Bay Area organizing group for another successful event. CAA members should feel free to contact the organizers with any questions, comments or suggestions: