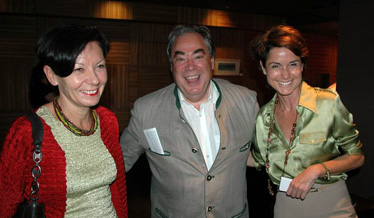 The CAA Paris Chapter held its third annual cocktail on June 6, 2007 at the Nomad's, a restaurant close to the Marché St. Honoré in the heart of Paris, with 32 in attendance. We kept the same location as it is convenient to all of us.

One member of the local bureau, Olivier de Schonen, could not attend due to his new job obligations.

Jacques-Yves Mulliez was just back from Moscow after having managed Credit Lyonnais Russian operations for the last six years.

Xavier Bommart has joined the new Euronext /NYSE structure in charge of promoting the listing.

Anne Larchez-Fayolle has just left HSBC France early June and is contemplating active traveling and taking the time she never had.

The number of young retirees is growing slowly, with Chantal Gerez, Jean-Louis Gleizes and Philippe Blandiniéres.

We learned that Bruno Schricke has just moved to Pakistan for ABN AMRO, and that Benoit Struye is retiring this year from JPMorgan.

Philippe Foulon took the pictures of the reunion and as usual he has done a splendid job!

In addition to our regular lunches organized by Olivier de Schonen, various additional reunions were discussed before the next annual cocktail. The date of the next cocktail may be changed to the winter season, as there are too many receptions in Paris during the May-June period.