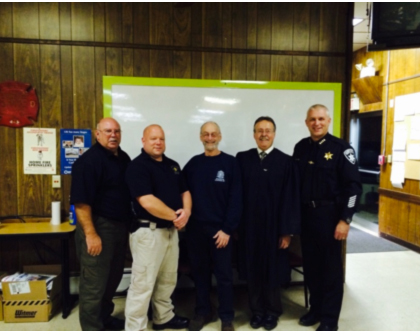 From Fighting Fires at Chase to Being a Volunteer Firefighter

David Levow worked at Chase from 1966 to 1981, in the U.S. Department, Credit Policy, Trade Finance and International Operations, mainly in internal consulting and information technology. He sent us this "Life After Chase":

I’ve lived in on a dirt road in this small town of 4,000 in rural upstate New York (going north up the Taconic Parkway from New York City, you drive through Westchester, Putnam and Dutchess counties, and then Columbia County, where I live) as a full-timer for 23 years, and a weekender for 12 before that.

We moved here on our son’s 10th birthday, and he attended Chatham schools from 5th grade through graduation and subsequently graduated from Cornell University.

When I left Chase in 1981, I went into consulting and bank training. I developed some training programs that became very popular. I was on the road a lot, but at least living in Manhattan made for a very accessible LaGuardia Airport. On the other hand, I began thinking that Albany Airport is more or less the same time (twice the distance, twice the speed getting there, a fraction of the hassle), so why not give up the city and move to the weekend place in Chatham?

We did it, and I have never looked back or had a moment of regret. I have always been an individualist and country boy (chainsaw, log splitter, John Deere tractor with all the toys, etc.), and I much preferred a house and not having to confront anyone on my way to my home (i.e., apartment).

Over the years living here, I’d had thoughts of joining the fire department, but I never acted until a recruitment day last spring coincided with a day on which I had nothing to do; so I went, filled out an application (10 pages long) and met with the chief, who gave me a rundown on how the department was organized (two separate companies within one department) and explained that I needed to pass both a background check (no arson conviction) and a medical exam. Upon completion of those, I needed to be approved by the fire company membership – no problem since the department is all volunteer and new members are always in short supply – and then by the village board, also no problem, since this is a small town and I am generally known and well thought of through my involvement with the local school and town boards. (Those are other stories). The fire department is actually part of the village, although not all fire departments are.

So I became a full member in July 2014 and got my ID and turnout gear. I knew no more about fighting fires than the average person, however, so I enrolled in a number of training programs. (The New York State Office of Fire Prevention and Control has a large number of courses available to firefighters.)

I learned how to deploy, connect, drain, roll and store hoses, hook them up to hydrants, position ladders and tie knots (actually very important in the fire service for raising hoses, ladders, tools, etc.). I learned how to operate the pumps on the various engines we use, as pump pressure settings are dependent on the type and length of hose and nozzle being used. I also became a sworn peace officer (fire police for directing traffic and providing safety zones for equipment and personnel at an incident), and attended a three-day emergency vehicle defensive driving course: Try going backwards through a slalom-type course while being timed by your instructor and penalized for each cone you knock down! All the instructors were top-notch, many of whom were active or retired fire fighters, sheriffs or state police, and a fair number were coincidentally from my department as well. All of the courses had exams, both practical and written. 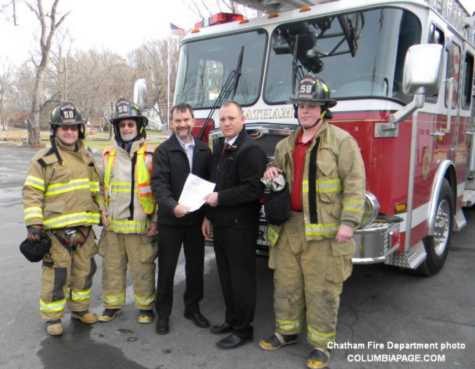 Shortly after joining the department, I got a chance to apply my financial background. A critical piece of equipment the department has is an air compressor, which is used to fill the air bottles that interior firefighters carry (similar to a SCUBA but without the “U”). Generally the younger members are interior, while I am an exterior FF. Our compressor is nearly 30 years old and is unable to fill the air paks to their rated capacity. Some research had been done on a new one, but the effort had been stalled for some time, so I picked it up. The chiefs (due to our organizational arrangement, we have more than one) had decided on the make and model, but little had been done on the financing (cost about $50,000), which had to be approved by the village. So I contacted local banks, got quotes and prepared a presentation package for the village board showing original purchase 30 years ago, specs on the new compressor, financing quotes and my recommendation as to how to proceed. It was presented at the next village board meeting and approved two weeks later. Total elapsed time – six weeks.

Geographically, the department covers the village (about one square mile) and some outlying areas. I am in one of those outlying areas, which means when a call goes out, it takes me five to six minutes to drive to the firehouse; our protocol is to go the firehouse where our gear is stored, while the chief goes to the scene. Many of the members can walk to the firehouse quicker than I can drive, so often the engine has left before I arrive. In that instance, I stay at the firehouse in case another engine is required or until we are released. I recently got a pager that will give me a couple of minutes extra notification time. We do keep logs of who responds to calls, so even if I’m not actually at the scene, by getting to the firehouse I get credit for having responded.

But I finally got my chance.

The air paks have to be tested every five years, which involves bleeding the air, taking off the valve and regulator assembly, inspecting them and putting them back together, for which we use an outside firm that comes to the firehouse to do it. As they finish testing, each bottle needs to be refilled. I volunteered to do it, as it gave me a chance to use the compressor that I had a hand in getting. It also meant that I was at the firehouse when we received an alarm! Suited up, I got on the first engine out. The incident was a blocked pellet stove chimney causing smoke backup into the structure, but no flames. I got to deploy a ladder, which was not a big deal on this incident but you never know what you’ll find. A couple of years ago there was a massive fire at a company in the area that deals with electrical transformers and had all sorts of chemicals at their facility (PCBs etc.). I wasn’t in the department at that time, but that one was all hands on deck (including fire companies from all around) and made national news!

I have been very pleased at my acceptance by the members. I have never seen or felt the slightest hint of resentment or being treated as an outsider coming up from the city. They all know my name (took me a while before I could say the same) and treat me the same way they treat the 40+ year members (length of service!) – actually, maybe a bit better, since I don’t have any old baggage with me.

My membership has also widened my social network up here, bringing me into contact with lots of guys and a handful of women (we have a few in the department including one captain and one lieutenant) with whom I would probably not otherwise have had any connection.

All in all, a very satisfying experience!