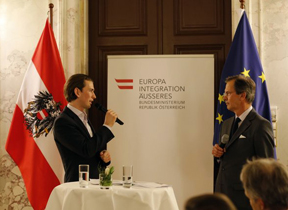 On Monday, January 26, 2015, Chase alumni in Austria enjoyed a meeting with Austrian Foreign Minister Sebastian Kurz, who is responsible for European, Integration and Foreign Affairs.

Kurz, at 28 the youngest foreign secretary in Europe, was interviewed by Gustav Dressler in the Marble Hall of the Foreign Ministry. (Dressler joined Chase's credit training program in London in 1982.)

Kurz, who became Minister of Foreign Affairs and Integration in 2013, had been a member of the Vienna City Council and chairman of the Young ÕVP (Austrian Peoples Party).

Chase Alumni, managers and entrepreneurs – a group of 160 all told – were both surprised and delighted by the fresh and open style of discussion. After a light-hearted introduction on the joys of starting out on a ministerial career with record-low popularity ratings, Kurz fielded questions from the audience on a wide range of topics such as the speed and dangers of integration, proficiency of different immigrant groups in Germany and the success of education within the school system, beginning with kindergarten. We also discussed Austria's experience with waves of immigrants from different national, cultural and religious backgrounds. Later, the questions shifted to the situation in the Ukraine and Austria's relations with Russia, and (this was on the day after the Greek elections!) to the political and economic prospects for Europe.

Perhaps surprisingly, there was no discussion of relations with the United States, presumably because there was no perception of any pressing problems there. After exactly an hour, the minister excused himself to continue his evening conferring with his European colleagues on Greece and sanctions against Russia, while the audience, fuelled by sparkling wine and canapes, buzzed with the thrill of foreign affairs being back on the agenda in Austria under the care of this energetic and thoughtful young man.