Bob Gjerlow, who worked in Chase Asia Finance/Capital Markets and Commodity Finance between 1961 and 1975, died of heart failure on April 1, 2015, about a month short of his 78th birthday. He was a resident of Bedford, NY, and a familiar face at Chase Alumni events in New York.

Born to Norwegian parents on Staten Island, NY, Gjerlow was a graduate of Long Island University in Brooklyn and a tank operator with the U.S. Army.  Following his military service, he joined the Chase Credit Training class of 1960. He worked in New York for seven years, in the commodities financing division and as a divisional manager in global credit. He was then posted to San Juan, PR, where he was the youngest-ever branch manager, according to his daughter, Stephanie. 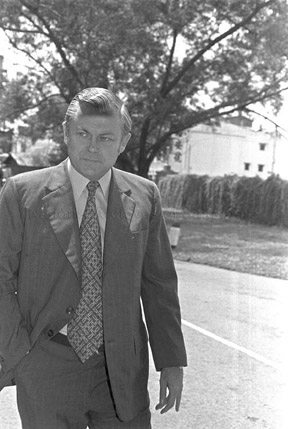 He and his family then returned to New York, buying a 20-stall horse farm in Bedford, NY, and launching a practice as a private investment counselor. He was actively involved in breeding thoroughbreds from 1983 to 1990.

He is survived by his wife, Nancy, a son and daughter and four grandchildren.

(Left: Gjerlow in Singapore, 1972, from the Singapore Press Times)

Anyone wishing to write a remembrance should send it to news@chasealum.org.

From Dominique Clavel: Bob was an enthusiastic customer man driven by his competitive spirit against all other foreign banks in Singapore. As General Manager for the three Chase branches in the country, he grew the bank's assets and greatly increased its profitability. He was also a very supportive boss for all his staff.

From Ken Arndt: A bit of a shock to hear of Bob Gjerlow's passing. I knew Bob more as a friend after retiring than during our days in the bank. I always found Bob to be a pleasant upstanding individual.  He was a dedicated family man and immersed himself energetically and successfully in his business endeavors. He was a well-liked, pleasant and thoughtful person, always expressing an interest in what one was doing. He will be missed.

From George and Jane Keenan: I knew Bob in 1974 while on a "head office" project.  My wife, Jane, our daughter, Kristina, and I were always treated as part of the Branch family and were invited to attend many of the Branch functions.  We remember their lovely home and their graciousness. We appreciated this and would like to say a belated thank you. We remember Bob as a real gentleman.