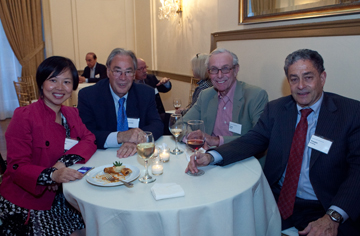 Click here for more photos (viewable only by dues-paying members)

The crowd may have been smaller than usual, but the gathering was as merry as ever on May 6, 2015 at the NYC Spring Reception, held at the 3 West Club.

Five new members were among the guests.

A minute of silence was held in memory of Frank Stankard, a mentor to many of the CAA members who were in the International department.

And speaking of international, the reception was graced by visitors Jean-Louis Gleizes and Nicole Delahayes from Paris and Van Mellis from Athens.