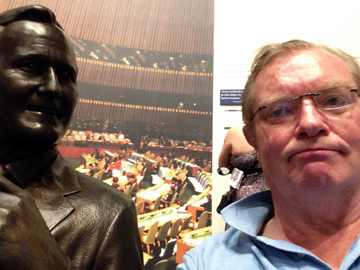 If It's Tuesday, It Must Be Texarkana

CAA Board Member and Treasurer Ottho Heldring started out from New York on April 12, 2014 to see the United States – probably every one of them, including some of their obscurest towns (i.e., Quitman, Texas, birthplace of Sissy Spacek).

"So I visited State Capitols in Harrisburg, PA; Columbus, OH; Indianapolis, IN; Springfield, IK; Oklahoma City, OK; Austin, TX. Also Presidential Libraries in Dallas (Bush Jr), Austin (LBJ); College Station (Bush Sr). Trip itinerary includes Route 66, which runs from Chicago to Santa Monica, with minor and major side trips, like Dallas, Waco (two days before biker melee), San Antonio, Galveston, Houston. Westernmost destination Seattle to visit sons and grandsons. Maybe Alaska. Then back East via a more Northern route. Not bound by any end date. Purpose is to explore the United States, but also good way to get to know oneself. My car is a Prius (50 mpg). I mostly stay at motels (Motel 6 being my first choice)."