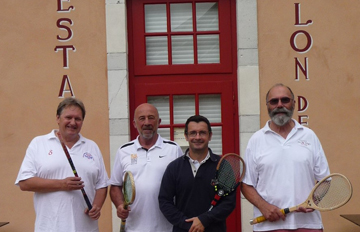 To know our CAA London coordinator and CAA board member Simon Mansfield is to know that he is a passionate player of Real Tennis: (as described below in Wikipedia):

Real tennis – one of several games sometimes called "the sport of kings" – is the original racquet sport from which the modern game of lawn tennis (usually simply called tennis) is derived. It is also known as court tennis in the United States,[1] formerly royal tennis in England and Australia,[2] and courte-paume in France (a reference to the older, racquetless game of jeu de paume, the ancestor of modern handball and racquet games; many French real tennis courts are at jeu de paume clubs).

The term real was first used by journalists in the early 20th century as a retronym to distinguish the ancient game from modern lawn tennis (even though the latter sport is seldom contested on lawns these days outside the few social-club-managed estates such as Wimbledon). Players of real tennis often call the game tennis, while continuing to refer to the more widely played derivative as lawn tennis.[citation needed]

Real tennis is still played on about 43 surviving courts in the United Kingdom, Australia, the United States, and France. Despite a documented history of courts existing in the German states from the 17th century, the sport evidently died out there during or after the World War II reconstruction. The sport is supported and governed by various organizations around the world.

Here is a dispatch from Simon and the rarified world of Real Tennis:

The Real Tennis court in Pau, France, was built by Henry Prince, who had arrived here to establish and enjoy fox-hunting in the 1850s. Paul Mirat (second from left, next to Simon Mansfield) local historian and publisher, son of the famous artist of the same name, wrote a book about the passion for fox-hunting, and presented it to the local Master of the Pau Hunt.

The Master, a man of some considerable ego, had a further 50 copies printed, to be distributed among all the other Masters of the Hunt in the various regions of France. Three years later, Paul (by now local head of the Bureau de Tourisme) received a telephone call from Washington, D.C. On the telephone was Freddy Prince, the major contributor to the building of The Prince's Court at MacLean, Virginia, just outside the capitol, and only the seventh court to be built in the United States.

Freddy indicated to Paul that a friend of his had seen a copy of his book in France, and since his great grandfather was featured, asked if he might have three copies sent to him in America. He also mentioned that he would like to visit Pau for the first time, some six months hence, to see where his great grandfather had lived.

Paul met him at Pau airport, and no sooner than he had installed himself in the car, Freddy said: "Can you take me to see the Tennis court?". to which Paul replied: "What Tennis court?"

"The court at Parc Beaumont, of course, the one that my great grandfather built."

"But there is only a ruined trinquet there, no Tennis court" says Paul, but to Parc Beaumont they went, and Paul was introduced to the only Tennis court built in France in the 1800s, as well as to the game of Jeu de Paume (Real Tennis) for the first time. That was in 2004.

Paul set about restoration of the court (ongoing), researched the sport, and invited several foreigners to play some inaugural games there, as well as developing local participation and arranging several tournaments that have now become regular fixtures. Paul went on to become President of the French Real Tennis Association and is now Chairman of the Pau court, dedicated to discovering and reintroducing old Jeu de Paume courts to the modern game.

The recent renovation of the façade in this photograph is one such example. Other courts in South-West France include Bayonne (1620), La Bastide Clairence (1512), and Urrugne, near St. Jean de Luz (1463).

This photograph shows three chairmen of Real Tennis clubs (The Queen's Club in the UK, Pau in France, and on the right, Norman Hyde, former Chairman of Leamington RTC in the UK, where Major Wingfield 'invented' and introduced Lawn Tennis to the world in 1853). The shorter gentleman is Alexandre Boris, former Pelota champion of France, and a mean Real Tennis player!

The photograph  commemorates an England vs France match, which sadly went the same way as the rugby on the previous evening, during the warm up for the World Cup. Norman, however, who turned 70 this week, had recently fractured his wrist.

England next plays France in Biarritz in October 2015, but not before the 1812 bi-annual challenge in Chicago earlier in October, commemorating the last time that England was at war with America!