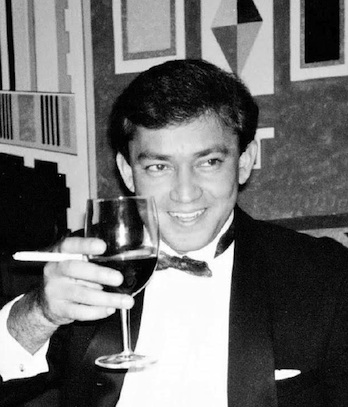 Naseer Doha, 62, died in early September 2015 in London, after a short illness.
Doha was born in 1953 and educated at Aitchison College, Lahore, Pakistan, and Imperial College, London, England, where he studied Engineering. After seven years with Arthur Andersen, Doha joined Chase in 1982.
Doha began with Chase Investment Bank in London and New York. He relocated to Hong Kong with CMAL in 1984 and played a key role in developing the highly successful Japanese Leveraged Lease product that was marketed to airlines in Asia and globally and was a seminal step towards the High Yield instruments we know today.

He left Chase in 1989 for Paine Webber/ TTG together with a number of other Chase Alumni. He returned to London in the 1990s to join Morgan Stanley ,where he ran their Structured Real Estate portfolio.
Throughout his long banking career, Naseer specialised in financing the airline and shipping industries. He was well known for his intellect and innovation.

Naseer is survived by his wife, Laeka, son, Sameer, and daughter, Nadia. Memorial contributions may be made to Trinity Hospice, UK.
* * *
Anyone wishing to share a remembrance should send it to news@chasealum.org.
From Dr. Brian Terry (a close colleague of Naseer's during his time at Chase): Naseer Doha was regarded by all who knew him as one of the most talented, intelligent and charismatic bankers of his generation. He joined me in the Corporate Finance department of CML with the initial objective of creating an International version of Chase’s very successful U.S. lease evaluation programme CLEASE, at the time the leading-edge computer programme for mathematical modelling of highly complex tax-based leasing transactions.
Having successfully completed this, and thereby laid the foundations for new territories to be researched and entered, his attention was turned to its application in the key Asian markets, especially for aircraft transactions. Almost single-handedly Naseer developed, firstly, the Hong Kong leveraged lease, and, soon thereafter, the Japanese leveraged lease (the JLL). It is difficult to accurately describe how enormously complicated a task this was, involving modelling immensely detailed taxation systems and developing highly innovative lease structures that complied with the tax and legislative frameworks in each specific country. This was a truly remarkable achievement and a milestone in the leasing industry that will never be equalled again.
Under Naseer’s leadership, the JLL went from “it can’t possibly be done” to developing into a multi-billion dollar market and consequently positioning Chase’s leasing group as ‘pre-eminent’ in this rarefied aspect of the investment banking world. On a technical note, it should also be added that CML and CMAL did not participate as lender or tax-base provider in these transactions; our role was to structure the deal, gain approval from the relevant tax authorities, syndicate the associated loan facility and source the tax-base to provide the considerable economic benefits to the airline lessee, without incurring any credit risk exposure: They were entirely fee-based deals.
It should also be pointed out that Naseer achieved all of this amazing success without being on some hugely inflated ‘ego trip’; the high professional standards that he always insisted upon, his respect of clients, associates and third party advisers, and his modesty about the outcomes was an object lesson in human behaviour to past, present and future ‘prima donnas’ in our industry.
On a personal note, I am deeply honoured and privileged to have known Naseer as a colleague and dear friend. He was a truly remarkable man, who will be deeply missed by his family and friends.