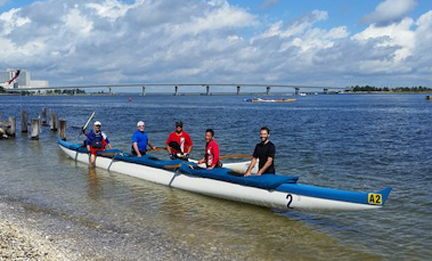 Outrigger canoeing uses traditional Polynesian seafaring boats: the six-seat canoe (OC6) features one or more lateral support floats, known as outriggers, that are fastened to one or both sides of the main hull.

One can pursue outrigger canoeing recreationally, simply to enjoy the scenery, “but the excitement in the sport is definitely in racing,” said Ed Tan, who races with New York Outrigger (NYO).

Tan worked with Chase in New York in Asia finance/capital markets from 1972 to 1975, after graduating from Yale. Since then, he did a 23-year stint with Bank of America as a managing director in the Energy Group and Structured Trade Finance and eight years at Moody’s as a vice president in Energy and Utilities. Tan also served as a senior columnist for Dow Jones Newswire, writing on financial developments in the energy, utilities, natural resources and industrial space.

One could say that outrigger canoeing brings home energy and natural resources in a personal way.

“Racing combines the thrill of moving the boat in unison with a team of fellow-paddlers while balancing the canoe's speed with the skills necessary to avert hulis, or capsizes,” Tan explained. “While careening around race marker buoys, the sensation of having the wind whistling by you as waves come crashing onto the canoe and raising the boat several inches off the water's surface is truly phenomenal. Sailors experience this as well when racing, but in outrigger canoeing, you, the paddler, are physically engaged every second of a two-hour race to make this happen, using natural tides and waves either to help propel the canoe's speed forward or fighting against them to move ahead.” 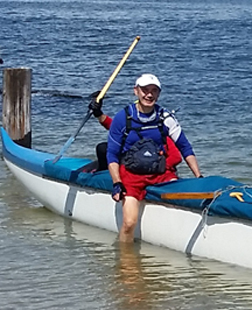 took up the sport only two years ago when he was looking to do some outdoor group activity after retiring from banking. The sport has now become his passion, and he was part of the victorious team in September 2015’s Hoe Wa'a Challenge in Atlantic City, NJ.

NYO is a community of inspired paddlers in New York City. As a volunteer-run 501(c) 3 non-profit, it is dedicated to educating New Yorkers about outrigger canoe paddling and providing access to the city's interesting set of harbors stretching from Brooklyn to Manhattan. NYO is based in the Hudson River Park's Pier 66, near Chelsea Piers, on the west side of Manhattan.

The NYO not only races other canoe clubs, but also holds free training for novices. Anyone may join who is above the age of 15. Each year for several years, NYO has sponsored the Liberty Challenge outrigger canoe races – the largest outrigger regatta on the East Coast – with the support of Hawaiian Airlines. Additionally, it hopes to continue developing its Makapo program, providing training and water access for blind and visually impaired New Yorkers.

About 30 out of the 110 active NYO members are in “Masters”, including both women and men. The sport has three categories of Masters: Masters who are folks in their 40s, Senior Masters who are in their 50s and Gold Masters, those in their 60s. Tan noted, “NYO’s Masters’ coach, Di Eckerle, finds the most challenging racers being those in their 70s who are fully-retired, have the time to practice and also happen to be very competitive.” Tan confirms that while there are many young people participating, the sport includes older folks who are not excluded as long as their bodies can function sufficiently well to paddle.

Tan wanted to do crew while in high school and college, but did not have the time, as he worked on school newspapers and debate teams instead.

“I do regular American canoe and kayak paddling recreationally, but the paddling technique for outrigger canoeing is different. For one thing, the paddling motion is a forward thrust of the blade that takes place in a space of about two to three feet right in front of your knee,” he explained. “Once the paddle has reached your knee, you spin it out of the water to avoid a negative drag on the boat.”

In addition to attending the many instructional practices where NYO teaches you the proper paddling techniques, he follows the club’s advice on out-of-water training: dips on parallel bars and wide pull-ups to strengthen the lats and shoulders. “Doing chest flies at the gym also help racers as the sequential paddling motion in a race resembles doing a continuous set of this exercise,” Tan said. “Together, these exercises also help develop the paddler's upper body so they can lift themselves out of the water and into a moving canoe during relay races. Paddling, biking, running, swimming or doing other forms of aerobics also helps to build stamina.”

One can travel off-season to do races in other parts of the country or the world that are warmer, as in the southern hemisphere.

“This is a matter of time and money,” Tan said. “So far, I have only raced during our northeastern regional season, which runs from June through September, but in southern California, the season starts in March and goes through October, twice as long as our own season. As an example, in March of this year, I visited some friends and family in the Los Angeles area and had the pleasure of paddling with one of the outrigger canoe clubs (IMUA Outrigger) in Newport Beach. The club's president invited me to join them for their opening practice in March when he heard I was going to be in the area. Similar clubs can be found throughout the country or overseas. They would all welcome paddlers who know the basics of outrigger canoeing.”

Most participants in outrigger canoeing have a tie to the Pacific region. Tan, who was born in Hong Kong, said, “Hawaii was my first point of entry into the United States. I also have a Hawaiian first cousin who has encouraged me to do this sport and lives on the Big Island of Hawaii. She is married to a Hawaiian park ranger who also canoes. Someday I hope to visit them and join them in their native sport on their home waters.”