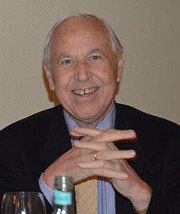 Heiner Hartmann, who worked with Chase Manhattan in Frankfurt, Paris and New York, died on December 12, 2015 after a two-year struggle with myelodysplastic syndrome (MDS). He was 75 years old and a Chevalier de l'Ordre national du Merite.

Managing Director of Hartmann Consult GmbH, Frankfurt, he served on the Supervisory Board of ESL & Network s.a.s. Hartmann had been a managing director of Société Générale Germany, and worked at Chase from 1966 to 1978 in capital markets.

Hartmann was a longtime member of CAA Frankfurt and participated with his wife, Prof. Sieglinde Hartmann, in CAA reunions around the world. The pair enjoyed Thanksgiving with other Chase alumni as recently as three weeks before his passing.

He is survived by his wife.

Anyone wishing to share remembrances should send them to news@chasealum.org.

From Hans van den Houten: He will be remembered by me as a fine, intelligent and dedicated alumnus of our days at Chase. May he rest in peace.