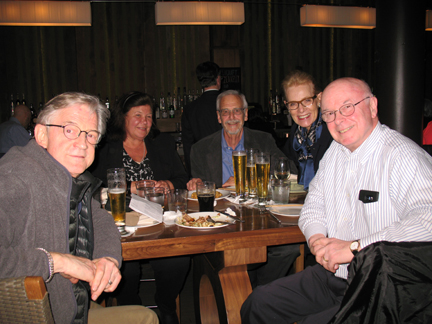 Welcomes Alum Back from Umbria

The San Francisco Bay Area was pleased to schedule a get-together on March 10, 2016 around the return of former Bay Area coordinator Roger Griffin (currently residing in Umbria) and especially welcomed the appearance by L.A. Chase Alum Steve Mueller.

The gathering was held at E&O Trading, a popular restaurant a block from Union Square here in our fair city. Locals who turned out in the torrential rain included Chuck Adams, Judy Webster, Vicki Willock and Vinnie Zinck.

We want to recognize Vic Reizman who was the first to the venue but could not stay. We also want to give our usual come home prodigal sister shout out to Deirdre Cherry and voice the hope that Russ Daulton will be able to free himself from his tough schedule at Deutsche Bank to meet with us next time.