An Excerpt from One Year in Africa

Against the background of tribal unrest, the last few months had been rather quiet, but travel between Burundi and Rwanda required special permits from both government authorities to cross the borders. Paul showed me the special pass needed to go through customs in Burundi, as well as in Rwanda. In addition, we were issued passes to enable us to cross the military border control points. Paul had ample experience with these crossings, as he traveled regularly to Kigali by car. However, this trip we would experience an unexpected turn of events. We were chatting away and talking about the terrible tribal clashes and death tolls resulting from the many Tutsi incursions into Rwanda and the horrible developments in Stanleyville, as well as in other areas of the Congo because of the rebel activities, when Paul suddenly sat upright as a large truck with a Shell emblem passed us on the road. The truck was loaded with drums and was heading in the opposite direction from where we had just come. Immediately, Paul told Oscar to turn around, follow the truck, pass him, and make him stop on the narrow road.

Paul jumped out of our car and ran to the truck and, after identifying himself as the Shell regional manager, asked the driver where he was going. The driver clearly did not understand all the commotion, but he complied with Paul’s request and showed his delivery and transit papers. Paul looked at them and, having already seen that the drums on the truck contained aviation gasoline, or “avgas,” he exclaimed, “Hans this is the load of avgas that I have been waiting for to be delivered in Kigali!”

I knew what he was talking about, as the delay in delivery of the avgas from Mombasa through Kampala and finally to Kigali had put our relationship with two of our main customers in difficulty; they both risked being grounded for lack of fuel. A recent closing of the border with the Congo and Uganda had further complicated the situation. Paul showed me the papers he had just scrutinized and pointed to the error. The destination of the drums had been indicated as Bujumbura, Kigali, not Kigali, Rwanda, so both the customs and police on either side of the border had allowed the truck to be cleared, and hence the driver was on his way to Bujumbura.

Paul explained patiently to the driver what had gone wrong and pointed to the error in the destination of the payload on the truck. The driver seemed panicked, but Paul told him to relax, and explained that he, as the Shell regional manager, would make sure that everything would be straightened out. He told the driver to turn the truck around, not an easy task on the narrow road, but somehow, on an even narrower path, the truck driver managed to make the U-turn and followed us to the border. After a solid half-hour drive, we arrived at the first border police post.

Paul alighted from our car and walked to the post. He was confronted by an impressive-looking army officer, who asked, with an air of great authority, why this truck was heading toward the border again, after it had just been cleared for Bujumbura. Paul explained patiently what had gone wrong and that the truck should have been going to Kigali and not to Bujumbura. The lieutenant indicated that it would be nearly impossible to reverse the authority for the truck, as clearance had been given and could not be reversed.

Paul mentioned to him that the arrival of the truck in Bujumbura would create a real problem, as the Treasury had not cleared any foreign reserves to import this big of a load of aviation gasoline. He suggested that it would be a lot easier if a document would be created to allow the return of the truck to Rwanda, as this would certainly avoid the problem of punishing those responsible for authorizing clearance for the truck to enter the country.

The lieutenant seemed unconvinced, but the inherent threat Paul had outlined for sanctions against those who inappropriately imported the avgas made him think. It took a few minutes and further discussions in Kirundi, which we could not follow, when the lieutenant said that he could not sign any papers, nor could he make the decision to allow the truck to proceed back to Rwanda. However, he would take Paul to meet with the captain and commander of the post personally, and they would have to drive up into the hills to do this. Meanwhile, he said, the truck and the driver would stay under guard, and to assure that we would not do anything untoward, like driving off and circumventing the orders to stay put, he pointed to me and said, “That gentleman is now arrested and will stay in that hut under guard by this soldier until we return from our visit to the captain.” Against Paul’s mild protestations, I was marched off to a small hut on the side of the road and ordered by my guard to sit on a small crate inside. My guard stayed outside, and I could see Paul being driven off in a jeep by the lieutenant and his driver up a hill toward an unknown destination.

After a half hour, my rifle-toting guard joined me, and I took the opportunity to ask him how long it might take for Paul and the lieutenant to return. The soldier seemed friendly and not too concerned about my temporary status as a prisoner. “About two hours and a half,” he said, as the drive to the location where the captain was holed up was about one hour, and he figured a discussion of at least half an hour and a return trip another hour. So much for comfort, as the heat in the hut was increasingly bothersome, as it must have also been for the soldier, who after about fifteen minutes inside seated on another crate, repaired outside to take a breather. About another half hour later, he returned. He asked if I was thirsty and if I would perhaps like a cold Primus beer. I could not believe that he would ask me this question, but he was very serious, and when I replied positively, he asked me if I had some money, so he could get us a couple of beers. I gave him a few francs, and, leaving his rifle leaning against the wall inside the hut, he disappeared. Clearly, I had no plans to use his rifle for any escape opportunity, as I felt comfortable enough with the situation and did not think that any heroic effort on my part would improve things one iota.

So, the rifle stayed where it was, and the soldier, true to his word, returned, and, yes, to my great relief, he carried a couple of nice, cold bottles of Primus. This Heineken product was a godsend, as I was about dried out due to the heat in the hut.

The soldier clearly was also ready to enjoy his beverage, and together we sipped on our bottles. I treasured every drop, and we exchanged small talk about my background, nationality, and my work at Shell. I learned little about him other than that he was born in Bujumbura and had been some years in the army.

We finished our beer, and the soldier went outside again to stand guard. I reflected on this odd situation, but nothing could be done about it, other than patiently await Paul’s return and hope for a release of our truck with the necessary pass to return to Rwanda. I must have dozed off when the soldier reentered suddenly to tell me that the jeep was returning and should be there at any moment. I ventured to the door and could see the jeep careening down the last stretch of the mountainside toward the hut. Paul alighted from the jeep followed by the lieutenant. Paul, a big smile on his face, waved a piece of paper, which clearly was our pass. Indeed, as he recalled, he had been in quite a discussion with the captain, who had not been very much inclined to cooperate, but Paul’s threat to immediately return to Bujumbura and to alert the Treasury Department of the obstinacy of the captain in relation to the illegal importation of a large cargo of aviation gasoline, for which no foreign exchange had been requested, made the captain apparently change his mind. Finally, he had given Paul a pass instructing the army post to allow the return of the truck to Rwanda. The instructions were also given to the customs post, which also fell under his command.

“LAISSEZ-PASSER” to travel to Rwanda

Unceremoniously, my captivity was ended, and Paul and I could leave with Oscar, the Shell truck now ambling behind us.

A Book About a Life Before Chase–

Named by the EXPATRIAT ARCHIVE CENTRE as Book of the Week. 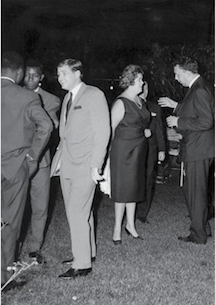 Hans van den Houten – co-founder of CAA and, at left, the man in the light suit – has published a riveting memoir of his first year out of college, working for Shell in the Congo, Burundi and Rwanda.

As a 24-year-old fresh out of Switzerland's University of Lausanne, the Dutchman would go to Africa in 1964 not quite knowing what to expect. What he found included political unrest, rebel violence, expat shenanigans worthy of a Merchant-Ivory film, a chance to learn and prove himself, and myriad adventures.

It's almost hard to believe that in just 11 months and three weeks a rookie like van den Houten could have gone through two burglaries, dysentery, an arrest, a car crash, three wardrobes, black market currency swaps, numerous girlfriends and often challenging work amidst political chaos.

Those who know van den Houten from later in his life will be fascinated by these exploits from his youth and look for traces of that adventurous chap in the mature Chase banker.

It's an easy and fun read.

You can order it online: