Here's our Q&A with the author. The book is available on Amazon.

How much of this is a roman-à-clef? Would Chase Alumni recognize characters at "Second National Bank"?

Second National Bank is portrayed as a very stodgy, down-at-its-heels institution. Is that your memory of Chase from the time you were there?

You have to remember that this story is being told by Kurt Wenner.  It is his story, and the opinions are his, not mine.  I would not say that Kurt thought that the New York bank was “stodgy”, rather it was more conservative than he had become accustomed to with his own company in LA.  And he had a rather inflated opinion of Swiss banks.

My own opinion was that Chase seemed like a breath of fresh air after the terrible management situation at First Chicago.  There was an on-going power struggle for years at First Chicago, which finally culminated in massive resignations among lending officers.  The new Chairman and I did not agree on investment policy, which led him to “replace his quarterback.”

Which, if any, of the embezzlement schemes were based on actual embezzlements, and how many were from your imagination?

The first one is solely the product of my imagination.  I embellished both the second and third from what I had known about the actual events.  There were two people (both of whom reported to me) who each tried to pull off one of these embezzlements on their own, but for the book I combined them into having one person do both of them.


Were the embezzlement schemes based on weaknesses in the financial system/bank protocols that still exist — that is, could these still be pulled off?

The Swiss embezzlement: I suppose if the unique set of circumstances ever arose in which a bank officer was able to get a customer to sign a withdrawal form without specifying where the money was to go, then that embezzlement could be repeated.

First NY embezzlement: I built this one up quite a bit from the actual case at Chase.  A really dishonest person could probably do something like this again, but I think Chase has sufficient controls so that he would ultimately be caught.

The Geneva/Gold embezzlement: Had the rules been followed at Chase, this embezzlement would not have occurred.  Unfortunately, the rules were not followed.

I’m impressed that you came up with that line, since it is something that experience has taught me to believe.  Investment analysts frequently tout bad stocks or advocate buying stocks at unsustainable prices.  The number of really bad stocks that analysts recommended to me at First Chicago was huge.  I think that they are always trying to outguess the market and come up with a different analysis, and this leads them to recommend secondary stocks.  Fortunately at Chase we worked with CIMC so I did not have to deal with the analysts.

In the 1970’s I received a great deal of publicity for opposing the so-called “two-tier market”.  There were supposed to be the “nifty fifty” stocks that you could buy at any price, no matter the price/earnings ratio.  Included in that fifty were companies like Polaroid and Eastman Kodak, companies that no longer even exist today.   It didn’t take long for that market to collapse.

What do you like to read — mysteries? novels? non-fiction?

I usually prefer the English murder mystery, but I just finished reading “Hamilton” on which the play is based, and before that I read “Sleepwalkers”, an excellently written account of how Europe stumbled into World War I.

What made you decide to publish a novel at the age of 86? Had you written anything before? How long did it take you to write this?

It took several years to write this since I would run into a stonewall at times and couldn’t think of anything else to write.  I would leave the novel for few months and then come back to it, hoping I could get some inspiration at that point.

As to publishing it at age 86, this certainly gave me something to do and kept me busy.  In addition, I had read a couple of novels, one by a highly respected English novelist, and I thought both of them were pretty bad.  So I went back and re-read what I had written, and decided it wasn’t all that bad do why not publish it.  Also, the guy who appears in the book as Josh Brown kept encouraging me to publish it.


Is another book in the works?

I need a good plot.

How else have you spent your time in retirement?

I have been active at the Oriental Institute of the University of Chicago and am a member of the Visiting Committee of the Institute.  I’ve also been active in several educational and arts organizations.  I’ve also done a fair amount of traveling, with two cruises, one on the Mediterranean and the other on the Baltic.

One of the reasons that I wrote the book was to try to understand what motivated the two guys that worked for me.  They were both very successful and had promising careers ahead of them.  Why risk everything to gain a few hundred or a few thousand dollars?  It may have been that they felt that they were smarter than everyone else.

A first-time novelist at age 86, Howard E. Hallengren has self-published a real page-turner of a novel about three embezzlement plots – partially based on events that took place at Chase Manhattan Bank, where Hallengren was Chief Investment Officer for the International Private Banking Division from 1982 to 1991.

A Chicago native, Hallengren earned his undergraduate degree as an English major at Princeton and an MBA from the University of Chicago.  Before Chase, he was Chief Investment Officer at the First National Bank of Chicago.

He created Falcon Real Estate Investment Management, Ltd. in New York in 1991, and chaired the nationwide investment advisory firm for real estate investment by non-U.S. investors for nearly 21 years. Hallengren retired in 2012 and moved back to Chicago. 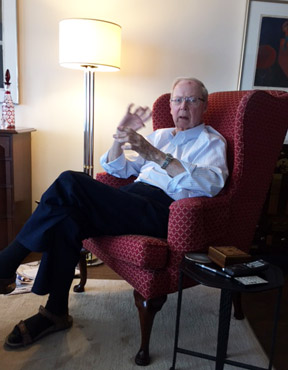