Paul Graham Tongue, former vice chair of Chase (USA) Bank, the credit card subsidiary of Chase Manhattan that he helped create, and Chase Manhattan's SVP of International Consumer Banking, died unexpectedly on July 7, 2020, at his home in Williamsburg, VA, at the age of 87.

A native of Philadelphia, PA, Paul graduated from Central High School and earned a BS degree in Commerce from Drexel University, followed by an MBA from New York University. He and his wife, Marjorie, were married in 1954 in Albuquerque, NM, where he served in the U.S. Army at Sandia Base during the Korean War. He was assigned to the Special Weapons Command where he taught electric circuitry.

In 1957, he joined the Chase Manhattan Bank, where he served for over 30 years in a variety of managerial positions in Operations, Data Processing and Consumer Banking. In the early 1970s, beginning with a fledgling plastic card, he expanded the bank’s consumer credit card business into a major force in consumer banking nationwide. When government regulation limited the growth of the credit card business in New York, he spearheaded the establishment of the Chase (USA) Bank in Wilmington, DE.

At the time of his retirement in 1987, he was Senior Vice President in charge of the International Consumer Banking Group in London, UK, with responsibility for the development and administration of retail banking activities in some 20 countries. His expertise in the consumer credit business led to further opportunities, first as Executive Vice President of software company Veritas Venture, Inc., and later with Andersen Consulting (now Accenture).

In lieu of flowers, contributions may be made to the Leukemia & Lymphoma Society, or to the Williamsburg Symphony Orchestra.

Among his survivors are his wife, Marge, and daughter, Suzanne. He was predeceased by his son, Douglas, also a Chase alumnus, in 2008. 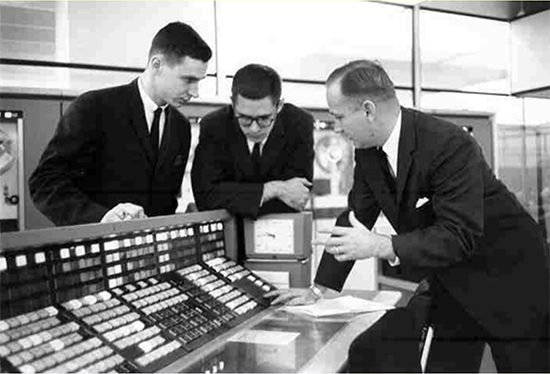 (L-R)  L.R. Kugelman, Frank Shea and Paul G. Tongue at 1 Chase Manhattan Plaza-3B on 11/28/1962 with the RCA 51 Computer, which handled D.D.A. and check processing transactions. It had been purchased by Bob O'Keefe and Bill Shine.

From Dennis Glavey: Paul was the best boss I had in 35 years at Chase. He was my boss for four years and my friend for another 39 years. He had knowledge, style and most of all humor. He truly cared about all the people who worked in any organization that he managed.
From Ed McKenna: Paul was my boss through several layers of management from January 1969 until I left Chase in 1990. He was a gentleman, a leader and moral man. He led the way to Delaware In 1981 and gave me the greatest opportunity to start credit card operations there. Paul was the first Chase exec to come out to Unicard in Great Neck in January 1969. He addressed the whole company at The Elks on Great Neck Road. Then on and off for the next 10 years he led us. When the government imposed Draconian limits on lending in 1979, executive management of the Chase corporation wanted us to close credit card accounts, reduce credit limits and generally blindly do things to ensure we didn’t increase outstandings. The card portfolio could be monitored and managed to ensure that didn’t happen without pissing off customers.  Paul willingly listened to an alternative plan, gave us marching orders to report daily on results and after a few weeks of good results, let us report less regularly and as a result maintained the portfolio with minimal customer impact. Just one of the many examples of outstanding leadership.
Maybe a little trivia that most others don’t know: In the 1970s, when Paul commuted by car from Huntington, it was the height of the CB radio fad. Paul’s CB handle was “BEYOND” and he could be heard on the LIE (Long Island Expressway) saying “Breaker 19 for Beyond” as he maneuvered his BLUE HORIZON through traffic!
He is missed and we can only hope that others will lead the way Paul did.
From Don Auriemma: I am saddened to hear of Paul’s passing.
I had the good fortune to be in the same line of work as Paul Tongue. That gave me the opportunity to get to know him very well. We sat on various committees together, and, after he retired, I had the extreme good fortune to have him join our consulting practice.
He was a brilliant man. He could sift through the clutter surrounding a problem and with amazing speed be able to sort out the critical factors and explain the solution.
He owes me dozens of one dollar bills which he took from me in frequent liar’s poker games.
I, in turn, owe him credit for the dozens of jokes he told me over the years.
I will miss him. Paul Tongue was a giant of a man in so many ways.
From Kevin McCabe: Paul was a unique and special person to so many, both professionally and personally. My fondest memories of Paul are all about laughter - the twinkle in his eye when telling a joke, the wry commentary about bank politics, and the ability to diffuse stress and keep things in perspective through humor. They don’t seem to make them like PGT anymore!
From Steve Tocci: I was deeply saddened to learn of Paul's passing, and I consider myself lucky to have known him. He was truly one of the nicest people I've ever met. He never allowed his ambition to get in the way of decency. Paul actually began working for Chase in 1960 upon his discharge from the U.S. Army. He was assigned the task of creating account numbers for all checking accounts, which were to be imprinted in magnetic ink on all customer checks and deposit tickets, giving birth to the MICR process.      I worked for Paul at that time until early 1963. Although I was just a teenager then, he always treated me with the utmost respect and even laughed at my one-liners from time to time. He frequently expressed an interest in my well-being and my general progress as a young man. His attention to detail and retention thereof was impressive. Some 25 years later, he even remembered the first and last names of the girls I had dated as a teenager!      He was truly a good man. R.I.P.
From Lisa Barbaro: Paul was just a terrific person and a wonderful boss. He led by example, always showing us how to get the job done with a smile on our face, laughter in our hearts and kindness towards all the members of the team.
From Steve Abrams: Paul was an incredible individual.  He had an engaging personality and a fabulous sense of humor, and was a strong but understanding executive. I was fortunate to work in Paul’s Division and interact wit him over the years. I will miss Paul greatly.
From Jim Ross: I had the pleasure of knowing Paul for 40 years, and he was one of the nicest people I've ever known. Competent, funny, measured, accomplished and admired are just some of the words to describe Paul. I once spent a week traveling with him in South America and literally went into withdrawal when we said our goodbyes at JFK. We visited Paul and Marge three years ago in Williamsburg and had a wonderful overnight of reminiscing. He had a little office in his apartment with Chase paraphernalia everywhere, including the famous name plate on his desk. He was a special person and I will miss him.
From Tony Singleton: A true gentleman, always friendly and easy to talk to. Paul was a senior who kept his human side accessible through wit and humor. He will be missed.