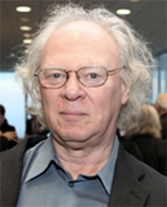 Another episode around this time was the notion that the credit card for bank customers should have no annual fee.  Prior to that the fee income was very substantial. There was a meeting between Don and Tom Lynch to discuss this change, where I was the only other person in the room (because of some outside research done for the Retail Bank).  For me that was a rather uncomfortable meeting, since I had done work for both men and had great respect for them both, even though they had conflicting interests in this situation.

I’m curious to hear other people’s perspectives on these issues as they happened back then.

From Karl Schmidt (2/6/21): I worked at Chase from 1966 to 1996, mostly at the Corporate Finance Department at Head Office. As best as I could, I have also looked at Chase from an investor’s point of view related to my 401(k) plan.

As we were approaching the early 1990s, many U.S. banks, especially the large U.S. money center banks, were suffering from a significant exposure to non-performing LDC (Less Developed Countries) loans, erroneously thinking that sovereign countries don’t go bankrupt. Further, Chase had a sizable non-performing commercial real estate loan portfolio. Wall Street lead analysts were mostly negative on those banks, with the result that their common stock prices were trading at mid-single digits P/E's and also at or below tangible book (now at P/E’s between 12 and 15 and at or above tangible book).

Back to the early 1990s: Chase was one of those vulnerable banks, and its stock price probably with a good upside potential. In came Wall Street activists, such as Michael Price of Heine Securities. In 1994, he “cut his teeth” in making a run on Michigan National, which then was sold the same year to an Australian bank. In early 1995, Michael Price, together with his top analyst Ray Garea, met with Tom Labreque (then Chase Manhattan Chairman and CEO) to discuss Chase's business strategy. Shortly thereafter, Michael Price concluded to make a run for Chase and not much later his firm Heine Securities announced that they had purchased over 6% of Chase’s common stock, thus becoming a significant shareholder.

This propelled Chase's Board to request management to act in the interest of shareholder value. One option was to find a merger partner. During that tense period, Citi and BoA did not seem to make much sense as a merger partner. They had the same or even greater problems than Chase. A combination with either of those two would probably also run into regulatory as well as political problems, because of the significant amount of overlapping businesses, eliminating competition, as well as the huge job cuts that would ensue.

Chemical had fewer non-performing loans, plus they had built up a good size U.S. Investment Banking operation, generating trading and fee income primarily from its middle market customer base. That fact was well recognized by Wall Street. This led Chase, which still had a sizable international franchise, and Chemical to consider a merger seriously. Tom Labreque, who sadly died only a few years later (in 2000) then led Chase's negotiation with Chemical to a “merger of equals”. The rest is history.

From Sergei Boboshko (1/25/21): I have been following some of the responses to Don Layton’s interesting piece on the Chase/Chemical merger/acquisition, which was a significant event to most of us, regardless of which bank we came from. My own recollections of that time focus more on the ‘cultural’ implications and ramifications that colored that event, rather than on which bank ‘won’.
I joined Chase on St Paddy’s Day in 1969 as a ‘credit correspondent’, which position was responsible primarily for responding to credit inquiries on our clients by other banks or creditors. By August 1971, and after a stint in the Loan Review Division, I was accepted into the Global Credit Training Program on the 7th floor at 1CMP. Immediately after completing training in October 1972, I spent the next nine years as a lending officer on overseas assignments. Thereafter I spent the next 13 years in New York, primarily in the Middle Market Banking Group, during which I also spent 2 ½ years as a work-out officer in the Special Loan Group under Margaret Klein. My training and experience was thus very deep as a line lending officer and manager of client relationships.
During my later years, Chase was progressively more and more interested in adding investment banking services to our product offerings, and I recall attending many such training seminars to supplement my skills as a corporate/commercial lender.
By the time of the Chase/Chemical merger/acquisition in 1995, I was back overseas, this time as Senior Country Officer and President of Chase Manhattan Bank International, our new Russian banking subsidiary, which we had just established to replace the Chase Representative Office, which dated back to 1973.
I was SCO in Russia for 4 ½ years (June 1994 – December 1998), during which we were very successful, and during which I began to experience the cultural shifts that I am sure many of us observed and are the subject of this piece. With the benefit of hindsight, I now understand that these cultural shifts were due not only to the merger/acquisition, but also to the new bank’s desire to become a major investment bank, consistent with global banking trends at the time.
For me, the fundamental cultural shift that occurred was the new bank’s emphasis on products rather than on relationships. As a proud Chase man, I was steeped in the tradition that emphasized the development and management of client relationships. The importance of products, however, was now being emphasized over client relationships, with the introduction of ‘matrix management’ as our new mode of operation.
Our primary lines of business/products at that time at Chase Moscow were corporate lending, trade finance, securities trading, global custody and financial institutions. Under matrix management, and with the exception of corporate lending (which reported directly to me), each such line of business/product had a ‘solid line’ reporting to a product manager (usually in London or New York), with a ‘dotted line’ reporting to me as SCO. The inevitable result of this, and despite how it was described on paper, was the gradual reduction in the role and authority of the SCO. In previous years it had been unheard of, for instance, for a Chase colleague from outside the country to call on an existing or prospective client unaccompanied by an officer from the local Chase entity, or even worse without the knowledge and approval of the SCO. As this began to occur I recall complaining not only to European management but to senior management in New York. My recollection is that I heard a lot of sympathy, but nothing changed.
There were a number of other examples of this narrower emphasis on product over relationship with which I was uncomfortable, most notably as regards the credit process. Coming from a background where stringent credit risk analysis was integral to our Chase culture, I was very disturbed that our product specialists relied more on third-party credit rating agencies than on our own analysis. I understood that buyers of those securities would rely on the credit agencies, but were the rating agencies now replacing our own credit process?
Perhaps these cultural changes were inevitable due to the growing emphasis on investment banking, rather than solely due to the merger/acquisition. Perhaps my discomfort was due to the emphasis on new skills that were difficult for someone coming from the ‘old’ Chase culture to absorb. I left Chase at the end of 1998 and I am pretty sure that I would not have survived the acquisition of JPMorgan in 2000 had I stayed on. Nevertheless, I have no regrets.
I worked for Chase for almost 30 years, which represented the greater part of my professional life. This association was responsible for the training and preparation for a most rewarding life and career, affording me and my family opportunities that  we would otherwise not have had.
It has now been 22 years since I left Chase and I thus do not know what sort of culture permeates JPMorgan Chase today. What I do know is that it is a global financial powerhouse easily eclipsing any of its ‘heritage’ banks.

From Clare Johannessen (1/14/21): I started my career at Chase in 1975 in a technology training program and was placed in Money Transfer technology at the end of the program. I worked there in various capacities, (eventually becoming a VP. I felt I had seen it all in my role, and then Chase merged with Chemical in 1996. I have to say I was terrified and was convinced I would lose my job, Bubt I was fortunate and did not. Instead, I (and many others from heritage Manny Hanny, Chemical and Chase) worked our “you know what’s off” to pull off an extremely successful merger.  We participated in creating “the best of the best”. This level of work and pride created bonds that we maintain till this day.

I stayed in Money Transfer (then part of Treasury and Security Services), and continued to be involved in all the subsequent mergers until the end of 2007. With each merger, our original Chase/Chem merger team grew larger–adding participants from the other banks. The attitudes of these various merger teams was never who bought who OR what management team was in charge, it was just “Get It Done” (on time and with quality-of course!).

For me personally, I loved the mergers, as I learned so much with each merger and gained so many friends. Today, when I look back, I have a feeling of enormous pride for helping to create the world class bank we have today.   My opinion is that all alumni contributed to this regardless of their role in the various mergers or their heritage bank. 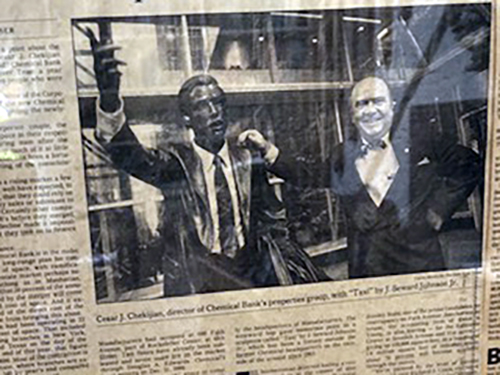 From Cesar J. Chekijian (1/9/21): In the 1980s, 1990s and early 2000s, I was Senior Vice President and head of Corporate Real Estate for Manufacturers Hanover Corporation. One day in the Spring of 1991, I was having lunch with a close friend of mine at the Executive Dining Room at 50/270, when he confided in me that through his father-in-law, who was Board Director of Chemical Bank, he had learned that the Chairman of Chemical Bank had met with Paul Volker, then Chairman of the Federal Reserve, for clearance to take over Manufacturers Hanover...and that Mr. Volker had said that Chemical Bank was not in a position to do such a thing. This is when leading banks were all in an upheaval due to the default of sovereign loans by Lesser Developed Countries.

I passed the information immediately on to our Chairman, who, without hesitation, the same afternoon, had walked across Park Avenue to Chemical Bank's HQ at 277 Park, without an appointment. The two Chairmen had met, apparently with a short discussion on successive succession, and they agreed on a "Merger of Equals". And that is how the "Domino Effect" of multiple mergers started.

Following the announcement of the merger, The New York Times published an article, with a picture (above) of me and the statue of a man calling a cab, which was in front of 277 Park, seeming to be pointing across the avenue to 270 Park, implying (according to NYT) that it was beckoning to Manufacturers Hanover all along!

From Ron Mayer (attorney in Chase's Legal Department at time of the merger): Both Chemical Banking Corporation and Chemical Bank were the surviving legal entities in the merger–a legal point without much significance.

While saying that Chemical bought Chase (which I often do) is an overstatement, it does reflect the fact that Chemical was the dominant party. Shipley was chairman.  Chemical insiders had three directors (Shipley, Harrison, Miller), Chase had two (Labrecque and Kruse). Most importantly, Chemical management knew what it was doing with organizing a merger. They created the various systems that controlled the merger process, while we Chase folks just looked on.

When the Chase pension plan was eliminated in the late 1980s it was replaced with a defined contribution plan, not a 401k.