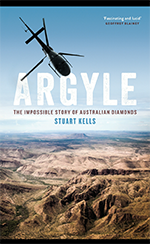 Argyle-The Impossible Story of Australian Diamonds by Stuart Kells, just published by the University of Melbourne Press, is a fascinating study of the discovery, development and intrigues associated with the Argyle diamond mine in Western Australia. It commenced operating in 1983 and is closing now after almost 40 years in operation. Two chapters deal with the challenging and supposedly impossible raising of a US$175,000,000 project financing by the Mine’s 38.24% owner Ashton Mining Limited. The majority owner and operator was the mercurial Rio Tinto’s Australian subsidiary CRA, which awaited fruitlessly for Ashton to fail in this financing endeavour so it (CRA) could acquire some or all of Ashton’s interest. Such was not the case because the Chase Manhattan Bank underwrote and successfully syndicated Ashton Mining's debt funding.
In regard to the above, I spent almost 18 months on this unusual financing opportunity. Argyle was the first diamond mine development that was financed by international banks. During this effort, I worked closely with Tony Coe’s New York-based Mining and Metals Group. The star of this Group was the well known and much revered and equally feared William (Bill) Mulligan. Sadly, I saw some time ago that Bill passed away in 2015. This was discovered by me in the regular Chase Alumni publications.
Alumni wishing to purchase a copy can weigh through the whole saga that includes corruption, diamond theft and so forth, or just have a quick read of Chapters 21 and 22, which deal with the endeavours of Chase to raise the financing.
.
* * *
Below is an image of the citation and Steuben apple given to Andrew Berry in January 1984 for Excellence in Corporate Banking and his contributions to the growth and success of The Chase Manhattan Bank. 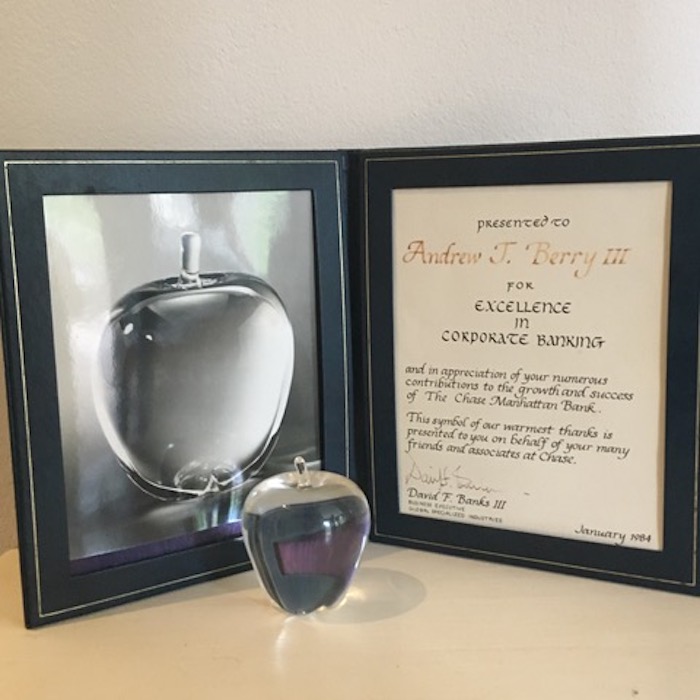 Comments
Send comments or your own "A Moment in Bank History" story to news@chasealum.org.
To Buy the Book
Via Amazon
Available now on Kindle; paperback to be released May 3, 2021
Via Melbourne University Press
This is the story of the intrepid Australian geologists who discovered pink diamonds in the Kimberley. The remote Kimberley region of Western Australia has a rich history and unique geography. In the 1960sm De Beers, the world's largest diamond company, sent gem-hunters to the area but they came away empty-handed. It was a vast region to survey, and they'd overlooked something vital. A few years later, a team of Australian geologists with a tiny budget searched for even tinier mineral clues. Those clues led them to the earth's largest diamond deposit and the world's richest source of rare pink diamonds.
Based on in-depth research and interviews-including with Alan King Jones, Bill Leslie and 'the father of Australian diamonds', Ewen Tyler-Argyle: The Impossible Story of Australian Diamonds details the almost overwhelming challenges with realising a diamond mining venture in Australia, shows how these obstacles were overcome, and explores the mine's impact and legacy.
Historian Stuart Kells has twice won the Ashurst Business Literature Prize, and has been shortlisted for the Prime Minister's Literary Award, the NSW Premier's General History Prize and the University of Queensland Non-Fiction Book Award. Kells' shorter pieces have appeared in The Paris Review, The Times, Lapham's Quarterly, Smithsonian, The Guardian, National Geographic Traveler and The Daily Beast. He is Adjunct Professor at La Trobe University's College of Arts, Social Sciences and Commerce.