In Memoriam: A. Cushman "Cush" May 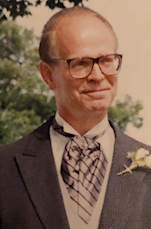 A. Cushman "Cush" May, a key individual in Chase's success in Japan and beyond, died of cardiac arrest on June 5, 2021. He was 87 and had been living in Stamford, CT.

Born in New York, May grew up in Darien, CT. He attended the Middlesex School, graduated from Yale and did post-graduate work at New York University.

May worked in Citibank’s Petroleum Department following participation in the Citibank Training Program. He founded the Intercredit Agency Inc. in New York in 1959 and served as its VP and director until joining Chase Manhattan in 1961.

May's initial work at Chase included coverage of Canada, as the International Department began its growth surge. In 1968, Chase sent him to Tokyo as Japan Country Manager, shortly followed by assignment as Regional head, adding Korea, Taiwan and the Marianas. He left Chase in 1975 as a Senior Vice President.

On completion of his work with Chase, May held senior positions with Connecticut Bank and Trust, the Asian Development Bank in Manila and Peregrine Capital Ltd., Hong Kong.

In retirement, May enjoyed gardening, hiking and reading. He served as President, Warwick Conservancy, Warwick, NY, from 2002 to 2003

His survivors include his wife of nearly 60 years, Jean Beattie May, his daughters Julia (Marc) Boddewyn and Emily (Brett) Pierce and three grandchildren.

NOTE: A memorial service will be held at noon, Saturday, June 26 at the Old School Baptist Meeting House, Warwick, New York, with a reception following at the Warwick Historical Society’s A. W. Buckbee Center, 2 Colonial Ave.

From Bill Flanz (6/7/21): During my 19-year career with Chase, I had quite a few bosses. Cush was one of the best. I say this, not only in the sense that it was a pleasure to report to him, but also importantly because I believe his management style got the best performance out of me for Chase.

Cush was kind, inquisitive and very supportive. Some managers “manage up” and some “manage down”. Cush was one who managed down, and did so in a collaborative way, always leaving one encouraged, and knowing that he was on one's side. He was never a “button-pushing”, detail-focused, second-guesser. This meant we always knew we had to accept full responsibility for our decisions and results. His support engendered a strong sense of accountability.

During my time in Japan reporting to Cush we made a lot of money for the Bank and had no credit losses, so his approach worked very well. In the meantime, Cush did an outstanding job of representing Chase externally in Japan, becoming one of the best known and well-liked bankers in Tokyo. He helped enormously to build our banking relationships, while also helping to create a number of profitable strategic businesses, including several joint ventures with the Mitsubishi Group.

I will miss Cush, but always treasure what I learned from him.

From Terry Horn (6/7/21): Both Amy and I were saddened to hear the news that Cush has passed away. While our paths did not cross during our time in Asia, we certainly heard his name often – Cush was definitely a legend. Fortunately Amy and I had the pleasure of meeting Cush and his lovely wife, Jean, after they had moved back to NYC, and during the subsequent years we had enjoyed a number of dinners together, reminiscing about years spent in Asia and current developments both in Asia and in the banking world. He will truly be missed.

For many of us, that cannot be the case. He was, and remains, our teacher and example, the storehouse of experience and poise we first think of, to help in tough times.

He formed and guided a landmark group, people of many backgrounds and passports, in Tokyo, Osaka, Taipei, Seoul and Agana, providing an ever-reliable sense of confidence in us, quiet correction as needed, with a manner of balancing our young ambition with an imperative of dignity and honorable standards – foremost, personal responsibility.

The people who found themselves chosen and placed in his orbit later spread into corners all over the Bank, and never lost our joint identity and sense of belonging.

He successfully brought about Chase’s program to serve the Japanese business community well beyond the home country, positioning a tight network of Japanese officers in East Asia, Europe and America.

None then present will forget an evening at the glorious Gordon Bunshaft residence in Tokyo; a sizable party of “his guys” and their best clients – a predictable time of cocktail chatter and positioning – but where was Cush?

Then: Jean May called us to silence, and introduced Our Largest Customer.

He shouldered his way into the crowded room, wearing his rather scant but complete Sumo uniform, as he was the reigning champion. Pleasantly, he made the rounds, as the floor trembled beneath his 350-pound-plus structure.

A. Cushman May appeared, all 5’8” and 135 pounds of him, dressed, if that be the suitable word, exactly as was the Yokozuna.

The floor was cleared; sacred salts were thrown; a (brief) match ensued; and the Victor gained lifetime rights to free banking at Chase Manhattan.

From Cyrus Hui: So sad to learn of Cush's passing. Recall we saw him and Jean last must have been 10 years ago.
I first met Cush in 1973 when he came to Hong Kong celebrating the founding of Diamond Lease HK where I was seconded from Chase NY. Somehow, Cush took a "liking" to me; he requested Jim Bish transfer me to Tokyo; so I and my family moved to Tokyo in 1974 where we spent the next 4+ years.
That was the most meaningful part of my life, learning and making lifelong friends that we have kept up to today.
I recall that as I was in off-shore ship finance and oil companies in the midst of "Oil Shocku", which was deemed "high risk", I had trouble getting approval from my "superior" and had to "appeal" to Cush, who backed me repeatedly as he had trust in his subordinates.
Other than business, Cush was kind to include "junior staff" like myself in numerous social events. Shirley and I have fond memories of special yakitori, tempura, sushi meals we enjoyed with Cush and Jean.
It has been 40+ years since our Tokyo days; we are all old folks, but sweet memories remain. Cush is always in our memory.