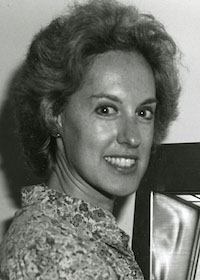 Ann R. Leven, a pioneer woman at the intersection of art and institutional finance, died on June 26, 2019 after a long illness. During her 1979-1983 tenure as vice president and senior corporate planning officer for Chase Manhattan Bank. Ms. Leven was on loan for 10  months in 1981 to the White House as staff director for the arts for the Presidential Taskforce for the Arts and Humanities.

One of the first women to be awarded an MBA by Harvard Business School, she was an accomplished artist-turned-executive who blended a painter's understanding of the artistic process with an uncommonly savvy business acumen. She was a role model for women seeking equality in the workplace, and her unique gifts resulted in a 30-year career governing the finances of three of the most prestigious artistic institutions in the country.

Born in 1940 in Canton, Ohio, Ms. Leven attended the Hathaway Brown School in Cleveland, Ohio, and received an AB in Art from Brown University, where she was awarded the Minnie Helen Hicks Prize in Art. Ms. Leven arrived in New York City at age 23 and called the city "home" for the rest of her life, maintaining her permanent residence there even when her career took her to Washington, D.C.

The first of her governing roles came in 1972, when Ms. Leven became Treasurer of the Metropolitan Museum of Art, an appointment that was significant both because she was the first woman to be named to the post and because she was only 32-years old at the time. Glamour magazine selected her as one of the Outstanding Working Women of 1975 representing "successful young women throughout the nation who have excelled in pursuit of their specific vocational goals." Ms. Leven left the Met in 1979 and joined Chase Manhattan Bank.

In 1984, Ms. Leven segued to the Smithsonian Institution, where she became Treasurer and Chief Financial Officer. Under her leadership, the Smithsonian's endowment fund nearly doubled in value as she oversaw numerous exhibitions across the Institution's collection of museums. In 1990, legendary museum director J. Carter Brown and CFO Daniel Herrick created the role of Deputy Treasurer of The National Gallery of Art for Ms. Leven, and in 1994, she became Treasurer. During her time there, she financially engineered dozens of famed exhibitions, including the unprecedented Johannes Vermeer exhibition.

For the bulk of her career, Ms. Leven also served as an adjunct professor at the Columbia University School of Business, where she taught courses in business strategy and administration from 1975 to 1993.

In the academic world, she was a Trustee of the Corporation of Brown University, a member of the Board of Overseers and twice an Executive-in-Residence at Dartmouth's Tuck School of Business, and a member of the Visiting Committee at Harvard Business School. In the non-profit world, she served on the boards of the Andy Warhol Foundation, the Carnegie Corporation of New York, the Red Cross Endowment Fund, the American Arts Alliance, the Artist Choice Museum, the Twyla Tharp Dance Foundation, the Music Advisory Panel of the New York State Council of the Arts, and the New Leadership Division of the Federation of Jewish Philanthropies.