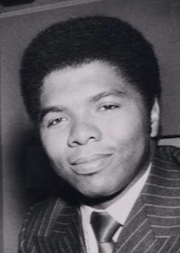 Joseph L. Searles III, who became a vice president in the Public Finance Division at Manufacturers Hanover Trust Co. in 1984–just one of his titles in a remarkably diverse and successful career–died on July 26, 2021. He was 79.

Born in Asheville, NC, he was raised in Ft. Hood, TX. He played football for Kansas State University, where he graduated with a degree in political science. He played professional football for the New York Giants before attending George Washington University Law School.

In 1967, he left the Giants to work as an aide to Mayor John Lindsay of New York, and became the mayor’s protégé. In 1970, Searles became the first Black person to work on the floor of the New York Stock Exchange, as a stock broker for Newburger, Loeb & Company.

Searles served as a member of New York’s Urban League Board of Directors and Treasurers, and was also president of the New York and New Jersey Chapter of the National Football League Players Association for retired players.

He is survived by three children and two grandchildren.