Though Salmon P. Chase Had No Affiliation with the Bank 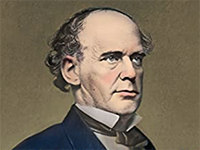 Although he had nothing to do with the bank, financially or otherwise, the Chase National Bank, a predecessor of Chase Manhattan Bank and hence JPMorgan Chase, was named in honor of Salmon P. Chase (January 13, 1808 – May 7, 1873), the sixth chief justice of the United States and, more pertinently, the 25th U.S. Secretary of the Treasury (1861-1864).

Chase is best remembered as a rival of Lincoln’s for the Republican nomination in 1860—but there would not have been a national Republican Party, and Lincoln could not have won the presidency, were it not for the vital groundwork Chase laid over the previous two decades. Starting in the early 1840s, long before Lincoln was speaking out against slavery, Chase was forming and leading antislavery parties. He represented fugitive slaves so often in his law practice that he was known as “the attorney general for runaway negroes”, and he furthered his reputation as an outspoken federal senator and progressive governor of Ohio.

Tapped by Lincoln to become Secretary of the Treasury, Chase would soon prove vital to the Civil War effort, raising the billions of dollars that allowed the Union to win the war, while also pressing the president to emancipate the country’s slaves and recognize black rights.

When Lincoln had the chance to appoint a chief justice in 1864, he chose his faithful rival, because he was sure Chase would make the right decisions on the difficult racial, political, and economic issues the Supreme Court would confront during Reconstruction.

Read a review in The Wall Street Journal.
► Roger Lowenstein’s Ways and Means: Lincoln and His Cabinet and the Financing of the Civil War, published March 8, 2022 by Penguin Press.
The book considers how Salmon P. Chase waged war on the financial front, levying taxes and marketing bonds while desperately battling to contain wartime inflation. And while the Union and Rebel armies fought increasingly savage battles, the Republican-led Congress enacted a blizzard of legislation that made the government, for the first time, a powerful presence in the lives of ordinary Americans. The impact was revolutionary. The activist 37th Congress legislated for homesteads and a transcontinental railroad and involved the federal government in education, agriculture, and eventually immigration policy. It established a progressive income tax and created the greenback—paper money. While the Union became self-sustaining, the South plunged into financial free fall, having failed to leverage its cotton wealth to finance the war. Founded in a crucible of anti-centralism, the Confederacy was trapped in a static (and slave-based) agrarian economy without federal taxing power or other means of government financing, save for its overworked printing presses. This led to an epic collapse. Though Confederate troops continued to hold their own, the North’s financial advantage over the South, where citizens increasingly went hungry, proved decisive; the war was won as much (or more) in the respective treasuries as on the battlefields.
Read a review in The New York Times.

Harold Holzer, a leading Civil War historian, will interview Walter Stahr, author of the new Salmon P. Chase biography, on Tuesday, March 22, 2022, at the New-York Historical Society. The program will be livestreamed. For more information and tickets, click here.

Chase National Bank was founded in a one-room office in Manhattan in 1877 by John Thompson and named for his friend Salmon P. Chase.

The firm soon became a respected correspondent bank and expanded rapidly in the early 20th century by developing a large corporate business. By 1930, it was the world’s largest bank, with assets of $2.7 billion. In 1955, it merged with The Bank of The Manhattan Co. to form The Chase Manhattan Bank. 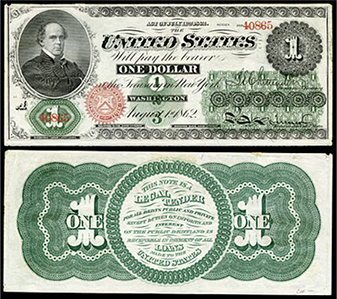 (Above) The first issue of $1 notes in 1862 as legal tender, featuring Chase.

Chase served as Secretary of the Treasury in President Lincoln's cabinet from 1861 to 1864, during the Civil War. In that period of crisis, there were two great changes in American financial policy, the establishment of a national banking system and the issue of paper currency. The former was Chase's own particular measure. He suggested the idea, worked out the important principles and many of the details, and induced the Congress to approve them. It not only secured an immediate market for government bonds, but also provided a permanent, uniform and stable national currency. Chase ensured that the Union could sell debt to pay for the war effort. He worked with Jay Cooke & Company to successfully manage the sale of $500 million in government war bonds (known as 5/20s) in 1862.

demand note, was printed in 1861–1862 during Chase's tenure as Secretary of the Treasury, and it was his responsibility to design the notes. In an effort to increase the public's recognition of him, Chase put his own face on a variety of U.S. paper currency, starting with the $1 bill, possibly to further his political career.