Recalling His Experience in Mariupol with IESC 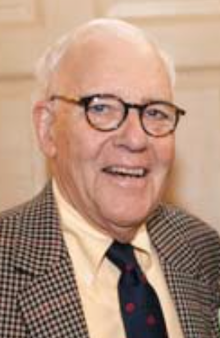 Watching the tragic news out of Mariupol, Tom Hayne can’t help but feel a special twinge. In 1995, having recently taken an early retirement from Chase at the age of 57, Hayne spent six weeks in the Ukrainian city as a volunteer with the International Executive Service Corps (IESC).

The assignment began a 15-year post-Chase association with IESC, the volunteer group that was co-founded in 1964 by Chase Manhattan’s David Rockefeller, Xerox Chairman Sol Linowitz and Frank Pace, a former Secretary of the Army who was then CEO of General Dynamics.

Complementing the efforts of the USAID and Peace Corps, also launched in the 1960s, IESC would enlist private sector American business leaders to spread technical and managerial knowledge with developing nations. In the 1990s, IESC tried to help countries of the former Soviet Union and Eastern Europe with their transitions to a free-market economy.

Hayne became involved in IESC at the suggestion of Rockefeller himself. In his 33 years at Chase, Hayne had followed his credit training with stints in corporate banking, community banking, marketing for the upstate New York banks Chase had acquired and the International Department. He then worked for Chase's InfoServe, with responsibility for global institutions and trade finance.

Hayne spent nearly 18 years in International, based in New York but with lots of travel; he was eventually promoted to Area Executive for the Western Hemisphere and a senior vice presidency. Often Rockefeller would join him for travels to Central and South America, and on one trip Rockefeller told Hayne about IESC. Knowing of Hayne’s retirement, Rockefeller urged him to teach a bank in Mariupol about Western banking.

Ukraine was pretty bleak in the mid-1990s, struggling from being cut off from the Soviet system and dealing with much corruption.

Hayne and his wife, Martha, flew into Kyiv. He can remember their 22-hour train ride to Mariupol in what seemed like post-World War Two, Soviet-style trains. (The approximate 515-mile ride now takes about 14 hours, or rather took that long before the Russian invasion.)

The Haynes were housed in the suburbs of Mariupol in what Hayne described as the equivalent of a Soviet-era motel. “Martha and I got hot water once. One night we heard the pipes cranking,” Hayne recalled. “It was very run down but clean, and there were Russian cartoons on a television.”

While IESC arranged for Martha to work on conversational English with foreign language students at a local university, Hayne went to work at the bank – the only bank in town, which had been spun off from government.

Mariupol was not exactly thriving. Indeed, Hayne’s recollection was that it might have had 35,000 to 40,000 people at the time, when the actual population was a little over a half million! Tourism had not yet been developed, despite the city’s seaside location. Most people worked at what was still known as the Lenin Iron Works. [According to Wikipedia, “On 25 April 2016 due to decommunization laws in Ukraine it was "renamed" in honor of scientist Zot Illich Nekrasov, so it is still called Маріупольський металургійний комбінат імені Ілліча (literally – Mariupol Metallurgical Plant named after Illich). Due to the change in name, Mariupol citizens started to call it Plant after not-that-Illich." This is not the same factory in which Ukrainian forces and civilians are currently trapped.]

“During Soviet domination, Mariupol had been a closed city, as there was a missile and rocket installation in Donetsk,” Haynes said. Along with another couple, the Haynes were the first “foreigners” allowed in, he added.

“Where we were staying it was very rural, though just 20 minutes from downtown. We overlooked the Azov Sea. The tennis court and beach were all run down. We’d go off for long walks in our jogging shoes through paved streets, but we mostly passed by farms,” Hayne rememberd. “When we walked by, there were many occasions when mothers would be in front of houses and they would take their kids and run inside. They could tell we were foreigners from our dress.”

The only person who spoke English was their 24/7 translator, so Hayne’s access to ordinary Ukrainians was limited anyway.

“Down in the southeast Donbas region, almost everyone spoke Russian. I think the president of the Bank – the only one with an office and a car in the bank – was probably ex-KGB. The daily language in the bank may have been Russian, though the government was attempting to get everyone to speak Ukrainian and encouraging newspapers to use Ukrainian,” Hayne said.

A language barrier wasn’t the only problem he encountered at the bank.

“I had to ask all of the questions. They weren’t sure what questions they should ask, didn’t know what the bank should be doing,” he recalled. “I’d ask, ‘Do you make loans to people? Do you have things called Savings Accounts? Small business loans?’ They had been so used to taking direction from a Commissar from the Soviet Union, being told  ‘this is how you’ll spend it’ and financing Soviet-owned enterprises.”

“I heard a lot of ‘Nyet’. My assignment wasn’t useless but it was frustrating,” Hayne said, “I probably learned more than the bankers, and we should have had someone to come back and check in.”

About 90 percent of the employees at the bank were women. Hayne’s impression was that they were motivated and did all the work, while, he said, “the men were drunkards”. His translator would regularly tell him that Gyorgi, the bank president, would want to see him at 4 o’clock. Hayne would go to Gyorgi’s office, and Gyorgi would start pouring vodka shots. When they went to banquets, Hayne recalls, the vodka was poured into – and drunk from – planters.

Hayne suspected the bank president was less interested in having his staff learn anything from Hayne than he was in showing off a senior American banker and having the prestige of having him to help them out.

Hayne’s final report was, he said, a Banking Management 101 manual, suggesting such basics as:

Because conversations had to go through the translator, Hayne did not get close to anyone or keep up with anyone. He wonders what they are experiencing now in the besieged city of Mariupol. But even in 1995, “More than once, people asked for help to get out. They were very concerned about their future, especially the kids Martha taught at school.”

For the ones who remained in Mariupol, and the newer generations who built it into a more vibrant and open city, Hayne now feels sadness and rage, as well as incredulity when he sees the city he lived in nearly razed to the ground.

When Hayne returned home from Ukraine in 1995, he stayed involved with IESC, which had a headquarters close to where Hayne lived. “That became my ‘Life After Chase’, working three to four days a week at IESC’s Stamford, CT headquarters. While he mostly helped select retired executives for assignments, he got to go abroad several more times.

Projects included: going with a retired IBM executive to Beijing and Shanghai for the Bank of China; spending three weeks in Romania for a recently privatized bank (“light years ahead of Ukraine”); spending three weeks in Peru, helping a medium-sized bank with a problematic credit portfolio, and various short trips to Columbia, Ecuador, Brazil and Jamaica – some of his old Chase haunts – but primarily to talk about IESC capabilities.

Hayne and his wife retired to Vero Beach, FL about a decade ago. He keeps busy as president of his local housing association, plays golf and hosts friends, his daughters and grandchildren. He also keeps beating the drums – not just for IESC, but literally for the Williams Reunion Jazz Band, with a group of Williams College alumni who perform not only at college reunions but also for charity events all year round, along the East Coast. There's a reason Hayne's email address begins "mrtomtom"!

By coincidence, this writer was in Kyiv–in those days better known as Kiev–at the same time that Hayne was in Mariupol. Visitors quickly realized that Ukraine might be a nuclear power, but it could not afford to mint coins to be used in the payphones on the street. The “second best” hotel in Kiev ran out of tea bags. Its best “Western” restaurant, which Hayne remembers as well, had a Marilyn Monroe theme. Each table had a bendable plastic statuette of Monroe in her “The Seven-Year Itch” white dress, except that instead of her skirt billowing over a subway grate, it was caught flying up over a fire hydrant, making her seem more like a toy dog than a sex siren. – Andrea Axelrod)

David Rockefeller, at the lectern, announces launch of IESC in 1964, at the White House with President Johnson present. 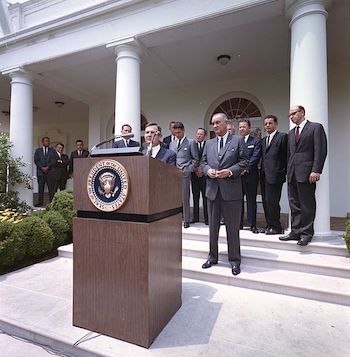 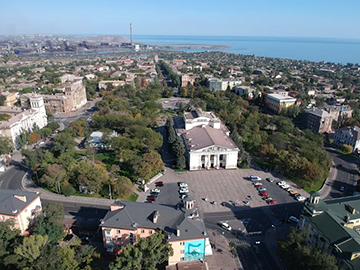 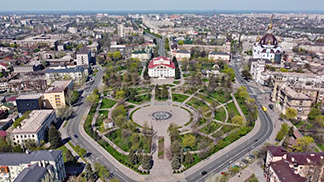 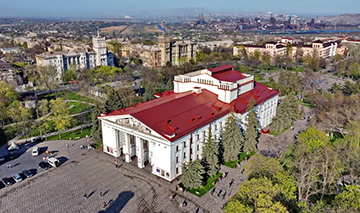 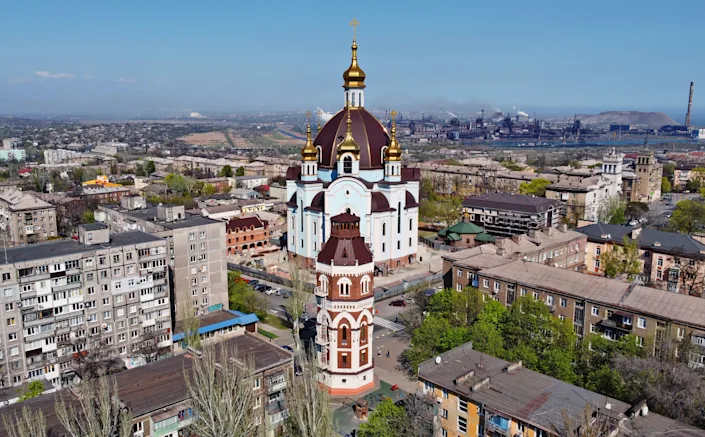