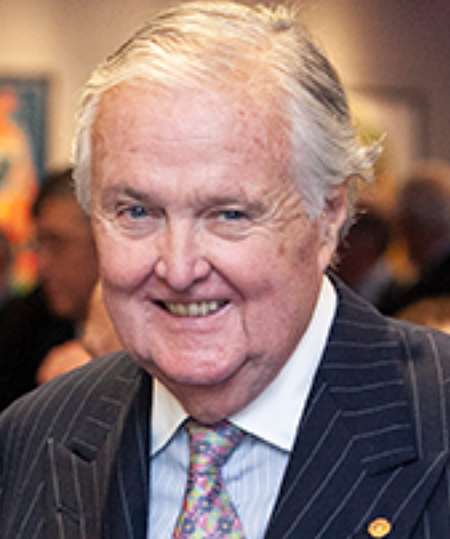 The Board of the Chase Alumni Association is heartbroken to announce the passing of John A. Ward, III, its president since 2005. He died of lung cancer on the morning of September 30, 2022, at a hospice in Wall, NJ, near his home in Spring Lake, NJ. He also had residences in Manalapan, FL, and in Manhattan.
"John was a larger-than-life figure, physically and professionally," said Ken Jablon, speaking for the CAA Board. "He was devoted to keeping the bonds of friendship alive among the people who had worked for the heritage banks of JPMorgan Chase, long after they might have left their jobs. He felt that Chase had given him a lot, and he wanted to give back."
Ward spent 27 years at the Chase Manhattan Bank, where his last position was CEO of the Chase BankCard Services and Executive Vice President of the Bank. In addition, he was the President and CEO of Chase Personal Financial Services (PFS), a retail mortgage and home equity lender that he led to become a Malcolm Baldrige National Quality Award financial institution finalist. He also held the position of the Senior Credit Executive for the Individual Bank (small business, middle market, private banking and consumer globally) and the Area Credit Executive for Europe, Middle East and Africa. As one of the five Credit Policy Officers, he had the Legal Lending Limit of the bank for all credits. Ward worked and lived in London and Japan for 15 years.
Ward left Chase and became Chairman of the Board and CEO of the American Express Bank, President of the American Express Travelers Cheque Group and a Member of the Planning and Policy Committee of the American Express Company.
Since leaving AmEx, Ward served on the boards of a diverse group of public, private and not-for-profit organizations. He served on the board of KCAP Financial (NASDAQ) and Lambro Industries, Inc.
He was formerly Chairman and CEO of Doral Financial Corporation (NYSE), a commercial bank based in Puerto Rico, and Innovative Card Technologies (NASDAQ), which provides secured powered cards for payment and identification. He has served on several boards including: Primus Guaranty, LTD. (NYSE), credit defaults swaps; Rewards Network (AMEX), dining rewards programs; “mkt Inc.” (NASDAQ), advertising and sales promotion, and Industrial Enterprises of America, supplier of automotive additives and fluids. He has served on the boards of St. Peter’s Preparatory School, Alexander Proudfoot US, the American Lyme Disease Foundation, Big Brothers, Big Sisters of NYC and New York Downtown Hospital.
Ward grew up in Jersey City. NJ. He majored in Economics and Finance at Boston College (Valedictorian) and in Finance and International Business at the Wharton Graduate School of Business of the University of Pennsylvania, where he was a Joseph Wharton Fellow.
Among his survivors are his wife of nearly 51 years, Denise; his daughter, Dr. Alison F. Ward, a cardiothoracic surgeon in Atlanta; his son, Andrew (also a Chase alumnus), and two grandchildren.
Memorial contributions may be sent to two not-for-profits Ward championed: Big Brothers Big Sisters or St. Peter's Prep of Jersey City.
We have created a separate page for remembrances. Please send yours to news@chasealum.org.