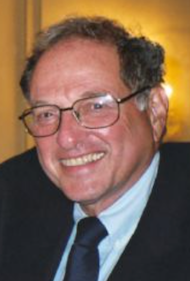 Mark Kaufmann, who enjoyed a 23-year career as Senior Vice President and Director of Corporate Development for the Chase Manhattan Bank, died on November 17, 2022, just short of his 90th birthday.
A born and proud New Yorker, who lived solely on the West Side, Kaufmann was a graduate of Horace Mann School and Lehigh University (cum laude) where he was Rex of the Pi Lamda Phi chapter, and elected to the honorary societies Omicron Delta Kappa, Beta Gamma Sigma, Pi Gamma Mu and Lambda Mu Sigma.
He served as a First Lieutenant in the U.S. Air Force in Korea and attended the Army War College. Kaufmann then became Vice President of Standard Financial Corporation, subsequently Partner in Milberg Factors before joining Chase Manhattan Bank. Upon retirement from Chase, he became Chairman of Kaufmann & Partners, LLC, a financial consultancy.
Kaufmann was past Chairman of the Banking division of UJA/Federation, Chairman of the Board of the Industry Leaders (Mutual) Fund and Honorary Trustee of the Calhoun School, where he secured funding for their new building, He was also a former Chairman and Honorary Director of the Lower Manhattan Cultural Council, Board member of the Martindale Institute of Lehigh University and Chairman Emeritus of Temple Israel of the City of New York. A longtime Board member of Old Oaks Country Club, he was also (past) Treasurer of the Harmonie Club of New York.
Among his survivors are his wife of over 65 years, the artist Carole Richard Kaufmann, daughter Susan Kaufmann and two granddaughters. He was predeceased by his son.

Please send remembrances to news@chasealum.org
From Mich Araten: I was saddened to hear about Mark’s passing. I worked with Mark when he was in Corporate Development and I was in Corporate Planning in the 1970s. Mark was an inveterate optimist. If one idea didn’t work, he was quick to put forth another. Always thinking creatively. His enthusiasm was infectious, as were his kind words for his colleagues.
From Ken Jablon: I worked with Mark many times during my 22 years with Chase because almost all of my jobs at the bank were directly in Planning or were line jobs where we were trying to expand into new products or locations.
When I had major planning projects to accomplish, Mark was quick to offer his staff to help. If these projects produced major benefits to the bank (and many did), he made sure that executive management knew which individuals were responsible for the positive outcome, whether they be in his department or in mine..