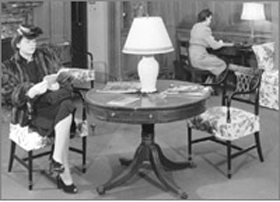 Courtesy of the JPMorgan Chase Archives

Our earliest predecessor, The Manhattan Company, was a water company. In 1998 an 8 ft. piece of wooden water pipe from the early 1800's was unearthed a few blocks from Chase Manhattan Plaza in New York City, and returned to its original owner - JPMorgan Chase!

President Hoover reduced the size of currency to the standard we have today in an effort to save on paper and ink during the depression (1929).

The firm owns the brace of dueling pistols used in the infamous 1804 duel between Alexander Hamilton and Aaron Burr. Aaron Burr was the first director of the The Bank of The Manhattan Company, the firm's earliest banking predecessor.

Salmon P. Chase's image is on the $10,000 bill. Salmon was the namesake for the Chase National Bank which later merged to become the Chase Manhattan Bank. He also served as Secretary of the Treasury under Abraham Lincoln.

At the turn of the twentieth century, banks set up separate teller windows for women and many established special “Women’s Departments.” These “Women’s Departments” were well-appointed rooms, away from the hectic main banking floor, where women could expect to find telephones, writing desks, comfortable furniture, flowers — everything bankers thought a respectable woman might need to arrange her finances. Some went so far as to pay out only new money - to spare customers the disagreeable annoyance of handling soiled money.

Three movies were either filmed at Chase or were a focal point of a movie: Dog Day Afternoon, Die Hard III, and Working Girl.

J.Pierpont Morgan was often photographed holding a favorite cigar, especially made for him in Havana. Toward the end of his life, his doctors begged him to reduce his habit down to 20 cigars a day for health reasons.

In the 1930s, a woman working in the bank had to obtain permission from her manager to marry a co-worker.

The Brooklyn Trust Company, a predecessor of Chemical Bank, was responsible for most of the $15 million needed to finance construction of the Brooklyn Bridge.

In 1973, David Rockefeller became the first American bank executive to enter the People’s Republic of China since the 1949 Revolution.

During the financial crisis of 1857 when 18 New York banks closed in a single day, Chemical was the only bank to redeem notes in gold instead of loan certificates, earning the nickname “Old Bullion”.

J.Pierpont Morgan helped christen the Titanic and had a stateroom booked for the ship’s maiden voyage in 1912. At the last minute he decided to stay on in Europe, instead of making the transatlantic trip.

In 1969 Texas Commerce Bank introduced lobby "traffic cops" to direct customers to the correct person for the service they wanted. Special costumes were designed for these young women to resemble the state's flag.