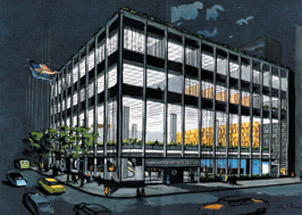 Courtesy of the JPMorgan Chase Archives

Little else relating to the early history of that institution is known, other than the fact that the banking business of the manufacturing company was acquired by the Phenix Bank in February 1817. Another remnant of that early period is a removal notice reading, "The Phenix Bank is removed to the west wing of the Car Factory, at Greenwich, corner of Asylum and Ames Street, and will be open for business during the usual hours," signed J. Delafield, Cashier.

This was 1822, the year of the great plague, the year the banks migrated. One hundred and twenty-five thousand of the 135,000 citizens of New York left the city to homeless cats after yellow fever broke out on Rector Street. Officials quarantined all that portion of Manhattan lying below Chatham Street. The city proper was, therefore, entirely deserted. The rattle of hearses and the hurried passage of a doctor or nurse were the only signs of life. Above 14th Street the city was farmlands, and when the fever broke out a large number of banks established themselves temporarily in the village area, giving a previously unknown lane the name of Bank Street.

During this time the roster of directors of the Phenix Bank contained the name of many influential merchants and bankers in the city. It is said that the first banking interest in this institution was acquired by the father of J. P. Morgan. In 1865, after the passage of the banking act, the Phenix Bank was nationalized and J. Pierpont Morgan appeared as one of its incorporators.

Shortly before this, in 1851, the Chatham Bank was organized as a state institution and opened for business on Chatham Street (now Park Row), from which location it took its name. On July 1, 1865, the bank was nationalized.

In the period directly following this merger, the Chatham and Phenix interests bought into the Century Bank, founded in 1901, and soon the names of Chatham and Phenix men appeared on Century's board of directors, until they had a majority. In September 1915 the two institutions merged, keeping the Chatham Phenix name, and it was this step that provided the Chatham and Phenix National Bank with its branches. The Century Bank had deposits of $14 million and 11 branches extending over a large area in Manhattan, and at the time of the merger had become the fourth-largest bank in the city.

It was assumed by the banking industry that Chatham Phenix would relinquish its national charter to become a state institution, as a national bank could not operate branches. However, the Federal Reserve System was then in its infancy, and many bankers were skeptical about its success. Undoubtedly, it would have been a most inopportune time for any large city bank to withdraw its support. Thus, it was important that every effort be made to hold the Chatham and Phenix as a member. By mutual agreement, a plan was devised enabling the Chatham and Phenix to obtain the branches of the Century Bank and still remain a national institution with membership in the Federal Reserve System. On September 17, 1915, Century stockholders approved the conversion to a national banking association, and the merger with Chatham Phenix soon followed -- giving the institution the unique distinction of being the only national bank in the city with branches.

In 1921 the institution acquired the Ridgewood National Bank, bringing total deposits to $40 million and giving the bank its first location in Queens. On April 28, 1922, Manufacturers merged with the North Side Bank of Brooklyn, and in December of that same year the Industrial Bank in Manhattan also merged with Manufacturers.

During the summer of 1923, the Columbia Bank, with two offices in Manhattan and one in the Bronx, was merged into the company, extending operations into another borough. This was followed by the Yorkville Bank merger and the acquisitions of the Gotham National and the Fifth National Bank in 1925, the Standard Bank merger and the Commonwealth Bank of New York merger in 1927, the United Capitol National Bank and Trust Company merger in 1928, the State Bank and Trust Company merger in 1929 and the establishment of a banking office at 44 Union Square East. The total number of offices was then 47.

Manufacturers' principal office had remained at 139 Broadway during this merger period. Increased activity, however, made it necessary to seek larger quarters, and in 1939 the main office was moved to the spacious bank building at 55 Broad Street, at the corner of Beaver. The 139 Broadway office continued to be used as a branch for many years.

Early in January 1931, Harvey D. Gibson, together with a group of associates, purchased a substantial block of Manufacturers Trust Company stock, in order to take an active part in the progress and development of the bank. On January 5 of that year, Mr. Gibson was elected president of the Bank, replacing Henry C. Von Elm, who had been with Manufacturers since 1903 and who became chairman of the board. This change marked a period of increased expansion, particularly in the development of correspondent bank accounts and in national business generally.

Manufacturers Trust continued to expand through mergers, acquisitions and purchases. The largest of the later mergers was with Brooklyn Trust Company in October 1950, adding 26 branches. At the time of the merger with the Hanover Bank in 1961, the company had 123 branch locations in the metropolitan area.

The Hanover Bank
As Manufacturers Trust grew, so did the Hanover Bank. By 1851, gold was flowing from the fields of California, and the nation had expanded to the West Coast. Railroads were tying the states together and the country was becoming a factor in world commerce. New York City was experiencing rapid growth, Trinity Church was one of the city's largest buildings, and a man standing by the fire bell at City Hall could see the entire city. This was New York on Thursday, April 10, 1851, and on a little square not far from Wall Street, named after George I of Hanover, the Hanover Bank began business. Its first office still stands on Hanover Square, and is the present home of India House. The capital of the new bank totaled $500,000, and the first dividend was paid on January 1, 1852. The bank never failed to pay an annual dividend in all the years that followed.

Six years after the Hanover Bank was founded, the country suffered a reaction to the gold boom. Twelve hundred commercial houses failed within the city alone; there were riots in the streets, and as many as 10,000 persons a day were fed by charity. The Hanover passed through this period safely, and in 1860 it seemed that the troubles were over and the country was on the road to prosperity. Despite the increasing bitterness between North and South, business boomed, and when Lincoln was elected President, most businessmen rejoiced as at the passing of danger.

That rejoicing was short-lived. On April 12, 1861, the first shot was fired at Fort Sumter and the War between the States began. The banks deemed it wise to band together, putting their coin into a common fund and otherwise aiding each other to enable them as a whole to sustain their dealers and by joint action to relieve the wants of the government. A syndicate of New York, Boston and Philadelphia bankers was formed to float a loan to the government, of which the Hanover's share was $510,563.

During the Civil War, prices rose and financial speculation ran wild. More than 14,000 banks were in existence at the time, and almost all issued their own bank notes. The result was that notes recognized in one city might not be recognized in another. To correct this state of chaos and create a market for government bonds, a national banking system was established by Congress; in 1865 the directors of the Hanover voted to join the system.

In 1874 a notable name was added to the bank's directorate -- that of James T. Woodward, a dry goods commission merchant. Mr. Woodward's integrity and abilities were quickly realized, and in 1876 he was elected president. He served at this post for 34 years, and before resigning he taught the banking business to his nephew, William Woodward, who succeeded him as president in 1910, continuing in that office until 1929, when he became chairman of the board of Central Hanover.

The Hanover Bank’s predecessors
Although the Hanover Bank was founded in 1851, there are two earlier institutions that can be regarded as forerunners. The National Bank of the City of New York opened its doors in 1831. The bank had already been chartered in 1829 by the state legislature, but there was an insufficient subscription to the capital stock. After several unsuccessful attempts within the next two years, the commissioners at last sought the aid of John Jacob Astor.

Astor agreed to subscribe the amount necessary to complete the required capital of $750,000. In 1831, the bank opened with Albert Gallatin accepting the appointment of president. Gallatin's careful preliminary organization brought about an unprecedented cooperation between the bankers of New York. The National Bank was later converted to Gallatin National Bank, and merged with the Hanover Bank in 1912.

From the viewpoint of strict chronology, the oldest component of the Hanover is the Greenwich Bank, which opened on January 10, 1831, on Hudson Street in the heart of Greenwich Village. It was consolidated with the Hanover in April 1927.

During the 1920s, both Hanover and Central Union were striving to maintain a conservative position, although the whole world after the end of World War I was being swept faster and faster into a terrifying maelstrom of financial speculation. This speculation centered in New York and at its basis was the overall confidence in the future of American business.

It was difficult to keep on an even keel in this torrent of bubbling enthusiasm, but both banks managed to reinforce their strength. Anticipating the troubled times that lie ahead, management of the two banks decided that a merger would create an even stronger institution. They merged in May 1929, forming the Central Hanover Bank and Trust Company.

The Hanover was primarily a commercial bank with a national system of correspondent banks, while Central Union's business was deeply rooted in New York. Therefore, there was no conflict of interest, and stockholders and customers greeted the merger with an upsurge of goodwill.

The Depression years
The problems and difficulties of the next few years were many. Production fell sharply, profits were practically non-existent, the gold standard was abandoned, there was a steep increase in taxes, and the deficits of the government continued. In spite of the times and conditions, both Manufacturers Trust and Central Hanover prospered and grew. Each successfully faced many crises, a second world war and the reconstruction and development era that followed.