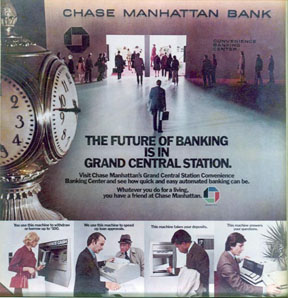 The Introduction of the Tellerless Cash Dispenser, Circa 1972

Attending the extraordinary Chase Alumni reception in October 2006, hosted by Jamie Dimon on the 60th floor, called back many fond memories of heritage Chase. Meeting old colleagues and sharing war stories was a highlight of the evening. It was great to remember lunches on the 60th floor with co-workers, with maybe a stop on the 59th floor on the way up, with customers who marvelled at the magnificent view, first of the Twin Towers under construction, and then their extraordinary presence from the Board Room.

The call for memorabilia for the Chase Archives prompted me to search old boxes, drawers, and the backs of closets to dig up "stuff" that might be of archival interest. My first find was a prototype plastic card embossed with my name. This card was to be the activator for our first cash machines. As a Product Development Officer for the retail bank in the early 70's, I was assigned to manage (with significant assistance from related areas) a project that was to explore "tellerless banking." The result of my efforts, under Retail Marketing Head Howard McGloon and EVP Hobe Harris, was a plan to install electronic card-activated cash machines in a convenient New York City location, and concurrently issue magnetically encoded plastic cards to every domestic checking customer. The prototype card we planned coincidentally has the same graphic as the current Chase debit card...that is, the familiar Chase logo fully covering the face of the card. Our blue and green card was rejected by corporate marketing, and a “more dignified” card was ultimately produced. Concurrent with our development of an online cash machine strategy, our major competitor, Citibank, introduced a magnetic card that activated terminals in some of their branches. These terminals only provided account information, not cash access. Similarly, Chemical Bank opened an experimental cash machine in a South Brooklyn location, but this was not an on-line system. The magnetic card they used held value and needed to be replenished when values were exhausted. A small but innovative Connecticut bank introduced a similar machine in a commuter rail station. This was highly innovative and introduced off-premise banking, a concept that quickly gained national interest while the restrictive banking laws of the era stifled expansion of the idea of nontraditional banking facilities.

By calculating the costs involved in cashing a check over the counter, we justified a machine network as a less expensive method to deliver cash to our depositors. Our project to open a tellerless banking facility took off, and we settled on a location with exposure to 160,000 commuters a day -- Grand Central Terminal. The extraordinary rent we paid for our location was deemed cost-justified. The location, then a restaurant on the east end of the great hall, was beneath the massive Kodak sign that changed seasonally and was a huge draw for visitors and commuters alike.

Banking circles were beginning to embrace the idea of tellerless banking. Dale Reistad, a visionary executive, headed up a consulting firm known as Payment Systems Incorporated (PSI). They were advocating the idea of a cashless society -- everything electronic -- even using cards to buy a newspaper. Seems that he was partially correct! Today we have both ATMs and cards and can buy most anything with a plastic card. Our own Ken Jablon was a consultant with PSI prior to joining Chase, where he was to head up new payment system projects.

The Grand Central location was named the Convenience Banking Center and blossomed into more than tellerless cash access. Besides three cash dispensers and one depository machine, other customer-activated computer terminals were included, providing information on all types of banking services...a little like our internet site today. We even provided a currency changer. A stand-up counter was staffed by banking representatives, dressed in blue blazers, who were available to answer questions about services and take applications for loans, etc.

The 650,000 cards we issued to our checking customers had Personal Identification Numbers (PIN) assigned. The PIN, which was used like a password, was derived from a complex algorithm that used the account number as a base numeric. As luck would have it, however, a customer in Westchester called to say that her PIN was the same as her daughter's, so how secret was that? The chance of this duplication, according to system experts, was one in 160 million. Some issues evolved in the system, as is likely in any effort of this magnitude, not the least of which was the cash machines not reading the magnetic stripe on the Convenience Card -- a problem that still exists today, but not as often.

My luck as Project Manager was to have the news media present at our grand opening to herald the arrival of tellerless banking in Grand Central Terminal. David Rockefeller was at the branch opening cerimony, and appropriately inserted his Convenience Card into the cash machine, and -- NOTHING. Nothing came out...his card was rejected! Through sleight of hand, we substituted another card, and out came the $50 -- our maximum withdrawal. The facility was maintained for only a few years. My job became Electronic Network Planner, and I proposed expansion of the cash machine concept to several additional sites such as 1 CMP, 1 NYP; the estimated cost of such expansion was $2 million. Amid management changes, the plan was tabled. I went on to join the Retail Correspondent Banking Team as a relationship manager, a responsibility I thoroughly enjoyed for a number of years before joining the Private Bank, from which I retired after 35 years with Chase.

About a year after I left electronic banking, new management came in and re-started the tellerless banking movement, which we all know today as ATMs. The Convenience Card was replaced by a debit card (which actually was what the Convenience Card was, but it was usable in our machines only).

Our initial strategy was innovative, bold, and successful. Dale Reistad was right...but we are still not cashless!