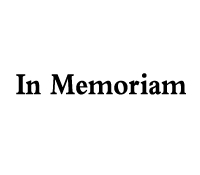 J.F. Kerry Hemming, who joined Chase Manhattan in New York in 1966 as Vice President of Global Branch Operations and retired  in 1994 as its Vice President of Commodity Financing, died on April 30, 2006.  A resident of Forest Hills, NY, he was married to Marta Hemming for 47 years and leaves a son, brother and two grandchildren. Kerry worked for Citibank in Africa and Europe from 1950 until he left for Chase.

Recalls Jean-Marc Bara: “I met Kerry in the late 1970s at Banco Lar.  I remembered that by then he had co-written (with another Chase officer – I think his name was Park, but I do not recall for sure) a book about bank operations management.   I remember one of the key points of the book being "test questions" to ensure one had a solid project plan (in planning for any project).  I still remember one of these key questions: How will we know we have reached the milestone/completed the project? The question seems very obvious, but I remember that question having been very useful to me in tightening up project plans by forcing specific completion metrics.

”In the last few years I met Kerry a few times at the CAA NY cocktails.  He was living parttime in Europe by then – I believe Switzerland – and had changed very little from the first time we met at Banco Lar.  I remember Kerry being very personable and always wearing a big smile on his face.”


From Eric W. Hasselman: "I first met Kerry in 1973 in Hong Kong. At that time, Kerry was in charge of an Asia-wide operations unit that assisted individual branches in implementing operational changes and modernization including the first phases of computerization. Kerry was a very dignified and respected individual and, of course, very much an Englishman. He was unsparing in his devotion to keeping the Asian branches functioning at the state of the art in operations as well as general management. His expertise in the field was unrivaled, and he always took the extra steps to help any units with problems. The officers who worked for Kerry were highly motivated thanks to his leadership, knowledge, and demeanor.

"Subsequently, Kerry had various assignments in the International Department and eventually in the New York Commodities Division, which represented an operational and organizational challenge at best. As I recall, Kerry retired from the Commodities Division sometime in the late 1990s.

"Kerry's favorite non-work pasttime was his 34-ft. Catalina sailboat, which he kept at a marina in Greenport, NY where my wife and I have a summer home.  For many years, we used to visit Kerry and his wife, Marta, on their boat and often went sailing with them. Kerry had been sailing since he was six years old and was a "crack" skipper.

"Another great love of Kerry and Marta's was the mountains in Switzerland, where they also had a home. Their son, Philip, and his family would frequently visit them in Switzerland from their home in London.

"Kerry was a good friend and a true gentleman in every sense of the word."