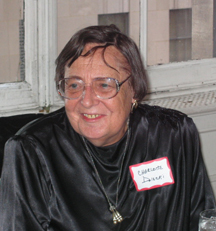 The Chase Alumni Association deeply mourns the passing of its member
Dr. Charlotte Dolecki on April 11, 2008. She was 69 and passed away
after a long illness.

Memorial services for Dr. Dolecki will be held on Saturday, June 14, at noon at St. Paul's Episcopal Church, 199 Carroll St., corner of Clinton St., Brooklyn, NY 11231 (Carroll Gardens area). A repast will follow at Cafe Rosa, approximately one block from the Church. Those planning to attend the repast are asked by husband, Emilio Robledano, to inform him by e-mail at earob@earthlink.net no later than June 1. Individuals not having access to e-mail may telephone Emilio at (718) 625-7718.

A graduate of Women's College of Medicine in Philadelphia (Drexel University), Dr. Dolecki served her internship and residency at St. Vincent's Hospital in New York, specializing in internal medicine, hematology and oncology. She was an attending Physician at Beekman Downtown Hospital and St. Vincent's, and Medical Director of the Village Nursing Home. After years of doing occupational medicine, her last position prior to her retirement was as Associate Director of Medicine at JPMorgan Chase.

She is survived by her husband, Emilio Robledano, 92 First Place, Brooklyn, NY 11231.

Memorial contributions may be made to Plan USA, 155 Plan Way, Warwick, RI 02886, mentioning in memory of Dr. Charlotte Dolecki. A memorial service will be held at a later date.

If colleagues know more about her work history at Chase or wish to contribute tributes, please contact news@chasealum.org.

Following is a remembrance by Kathy MaGaw:

There are few people from Chase to whom we referred more often by title than by their first name. One was Dr. Dolecki. It’s not that we didn’t know her first name, but rather that “Doctor” seemed like a better fit than “Charlotte”.

Many of us didn’t know a lot about her…where she went to medical school, that she was married (to Emilio Robledano), lived in Brooklyn, and loved her garden and her many (and truly spoiled) cats.

Most of us couldn’t tell you a chronology of her assignments within Chase, but many of us can relate a least one funny or touching story about a one-on-one encounter with her. For those of us in Operations and Systems such encounters took place in MetroTech in Brooklyn. At the time the buildings were being constructed, few of us were enthusiastic about the move from Manhattan (1 NYP). To make our relocation more appealing, people like John Scicutella and John Farrell saw to it that MetroTech had everything you could ask for: 24- hour cafeterias, ID/debit cards eliminating the need for cash, in-house post office services, subway token machines, a daycare center, a cardio-fitness center and a very well equipped health center. Doctor Dolecki provided invaluable help and insight into the latter three, and literally thousands of Chase employees benefited.

Her biggest challenge, however, was the O&S executive team. We were well known for working hard and playing equally as hard. We were a tight knit group who argued among ourselves privately but covered one another’s back when the going got tough. Most of the team arrived well before sun up and many thought of FED CLOSING (often 10 pm or later) as the end of the day. Building data centers in Bournemouth (U.K.) and Hong Kong and running 24-hour operations meant that many spent more time on board planes than on U.S. soil. Some of us smoked, most of us drank and few of us owned overcoats. Many thought us crazy. We thought we were invincible. She saw us differently. She saw bronchitis, pneumonia, poor diets, insomnia and anxiety, and went on a personal crusade to save us from our own undoing. If we didn’t come to her, she came to us. We tried to hide in our offices…conference rooms…the executive toilets even. Steadfastly she would seek us out. Blood pressure readings were taken during meetings and phone calls. Flu shots were given in the elevator. She made us understand the difference between HDL, LDL and triglycerides. Those red Chase medical travel kits that she shoved into our luggage as we headed to the airport were lifesavers when a voice was lost just before a speech or Montezuma’s Revenge stuck at an inopportune time.

We often kidded Dr. Dolecki and complained that she was mothering us. Looking back I think she was doing her very own very special version of covering our backs. If we failed to say it then, let’s remedy it now by saying THANK YOU DR. DOLECKI.