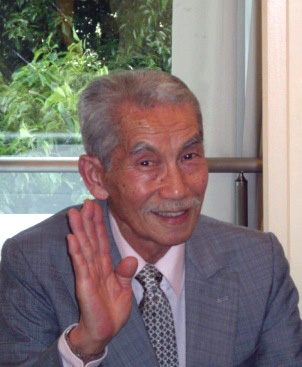 One hundred and twenty-nine former local and expatriate staff, husbands, wives and widows, and guests from the Osaka Chapter gathered at lunch time on June 6, 2008 at Toranomon Pastoral, what Americans might call a banquet hall but on a really grand scale, to mark this, at once, auspicious and nostalgic event: the 20th and last anniversary of the Chase Tokyo Old Boys Old Girls Kai.

This was to be the last such meeting because, as Chairman Hiroshi Aiko said in his remarks, members of the younger generation are too busy with their responsibilities to keep the organization functioning, and we’re getting older! Unsaid, but as may be fitting, the Pastoral itself, recently the subject of the most expensive single building real estate purchase in Japan’s history, will soon be demolished to make way for some major new construction, and so both kai and the building in which the annual meetings have taken place will soon both be history.

Amid cries of old friends and colleagues meeting for the first time in a long time but nonetheless promptly at 12.30 pm, as befits the country where even the subways run precisely on schedule, the proceedings were called to order in Japanese and English by the Master of Ceremonies Seiho Kishimura – the first order of business being an opening address in English by Chairman Hiroshi Aiko, and what an address it was.

Aiko-san began by telling us he was a little nervous, not having spoken publicly in English for 20 years and that he didn’t expect to do so again, but he need not have worried. He was letter perfect speaking entirely without notes. He introduced all the guests, exapatriates and wives, including Jaime Garcia dos Santos, who has returned to Japan to retire on a permanent change of status (PCS apparently being a U.S. military term), Ernie Olsen, still resident in Tokyo ,and Chris Carlin, the only remaining former expat still employed at JP Morgan Chase. He introduced Amemiya-san, Morita-san and Tsuji-san from the Osaka kai, Mrs. Matsuoka, who had traveled from Kamakura that day, and Mrs. Takenouchi, widows of Kazuo Matsuoka and Makoto Takenouchi respectively, former senior Japanese staff who had passed away in 2000 and 2004.

And Aiko-san solved a problem for me as I suppose I should have known he would. I’d been searching all week for a suitable quote for the occasion without finding one. He provided it.

He reminded us that during the 20 year life of the Kai, 56 members had passed away; Aiko-san told us that they had sent a message to him asking to be invited to be with their old friends at this final meeting. He then quoted that poem variously ascribed to Navaho Indian priests, 19th century magazines and the ubiquitous anon. Its origins remain a mystery.

It has been translated into Japanese, is a popular song here and was an appropriate quote to spur memories of old friends now members of the ultimate kai to which we can all look forward to membership.

Tim McGinnis responded on behalf of the guests – “so many faces I remember, so many names I don’t because I’m getting old” and reminded us that the original funding for the Kai had come from the Chase budget while it was his to control and that his boss Dick Boyle had not been consulted! Tim thanked the organizers and the participants for all they had given us and reminded us that friends and family were the most important parts of our lives and that we should look after each other. S. Takahashi, mover and shaker behind the Kai for so many years, assured us that, while Kai might no longer exist, the phone network would continue to operate to provide that mutual support.

Amemiya-san spoke on behalf of the Osaka Chapter which will continue to be active and then it was time for a brief silent tribute to the departed members followed by a toast by Toshiaki Morita, recently recovered from heart surgery, to all and by all.

And then a chance to talk and take photographs. Nakama-san, secretary to a generation of General Managers (some of us thought she actually was the General Manager) with Tim & Martha McGinnis, Bill Flanz and Janet Nathanail, and Robert Binney. The Osaka shitencho together: S. Takahashi, Jaime Garcia, Rich Bittenbender and yours truly and the Osaka Chapter representatives. The planned group photo didn’t materialize as there were too many of us and far too difficult to organize in the middle of the party.

And so an end of an era.

But not before I, on behalf of all Chase Japan staff present and departed, pay a special tribute to Seiichi Takahashi and Hiroshi Aiko for having organized and kept in being this organization for us and for so many years, to a great committee member for 20 consecutive years, Mitsuo Ikenoue, with responsibility for administration, to the other current committee members, Yasuo Iwakiri and Yoritoshi Toki, and to past committee members. Thank you all.