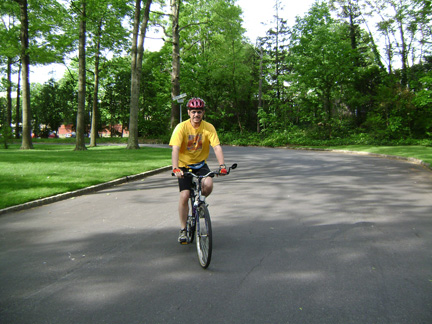 Article about the trip in the Newark Star-Ledger

Through an event called the Fuller Center Bicycle Adventure, CAA Member Doug Stephens is currently riding his bicycle from coast to coast – 3,300 miles in total – in support of The Fuller Center for Housing, the new organization created by Millard Fuller, founder of Habitat for Humanity.

From June 14 through August 8, 2008, Stephens and some 10 other riders are biking from San Diego, CA to Savannah, GA, stopping to put their own hands and hammers to work on many Fuller Center projects building and rehabilitating housing for the poor. They will be riding approximately 80 miles per day for eight weeks.

The Fuller Center is a faith-based program, and the bicycle adventure is fashioned as a spiritual journey for its participants. As the Fuller Center states, “Like the early apostles, our role this summer will be to strengthen and encourage these new groups [Fuller Center Covenant Partners] and to help plant new ones. We will do it by biking, building, speaking, and encouraging, and we will make a difference.”

Stephens, who lives in Summit, NJ, worked at Chase in the United States and Mexico from 1971 to 1982, in audit, private banking/investment, and credit & marketing.

Stephens himself is hoping to raise $5,000 by having people sponsor him on the trip. Anyone wishing to make a donation in Doug’s name or wishing to read the bikers’ blog from the road should visit www.fullercenterbiketrip.com.