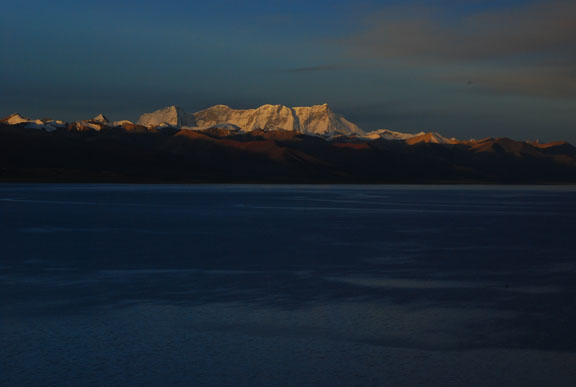 Cyrus K. Hui, who lives in Hong Kong, worked there for Chase from  1970 to 1984, in Asia Finance/Capital Markets (corporate, merchant, commodities and trade banking). He is currently managing director of Midwave Group Ltd., a financial advisory firm.

On August 8th, I boarded the train from Guangzhou to Lhasa, a 56-hour train ride from the southern tip of China to Lhasa, covering 5,000 kilometers.   The train ride was uneventful, but the Qinghai-Tibet Railway through the Tibetan Plateau of 4,500 meters was absolutely an engineering feat - and "environmentally-friendly".

Arriving Lhasa in the evening on the 10th, I immediately felt the "mountain sickness" at 3,600 meters.

In the old section of Lhasa where I stayed, there were policemen all over, due to recent "3.14" riots and unrest. A couple of monasteries were closed off, as bombs were recently discovered. Some of the buildings had been burned out.

It was perfect weather and zero pollution. One never felt so close to the sun.

After three days of "taking it easy", I headed to Mt. Everest. We camped overnight at the base camp at 5,200m. Snow fell that night. I was plagued by a terrible headache all night as snow fell. I didn't see much of Everest as it was hidden in the clouds.

Amidst the snow-capped mountains and vast wilderness, one can't help but felt the insignificance of "being".

The Tibetans in the city and the villages were relatively well-off and seemingly content - relatively untouched by "modernization".

If there was any drawback, it was too many Han Chinese in Lhasa...I guess it is the price to pay for "modernization".

I plan to return soon, as I barely scratched the surface of Tibet and its sceneries and people that I wish to know better.