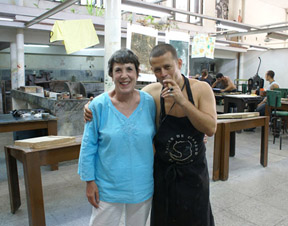 Chase Alumna Carrie Adrian has collected Latin American art and artesania for over 30 years.  For the past three years, she has used Cuban travel opportunities to visit artist friends and to support the Museum of Latin American Art, Long Beach, CA (MOLAA), where she’s been an active volunteer for many years.

“Three years ago, the museum CEO at that time asked if I would assist in obtaining artist donations for the museum’s annual fund-raising auction, which is held each October. Of course, I said, ‘Yes.’ I have done this for each of the past three years and donated the cost of my trip to the museum. The bottom line is that I have the contacts in Cuba that the museum does not have. I also have a good eye for art, so the museum feels comfortable in allowing me to use my judgment in selecting the art for the auction and the juried competition,” Adrian explained.

The auction is the largest sale of Latin American art west of the Mississippi and attracts collectors from throughout the United States and Latin America. (See www.molaa.org.)

“You might say that I have become a volunteer curator for the Cuban pieces donated, and I love it,” said Adrian, whose South Pasadena home is chockablock with art from her travels and years living in and working with Latin America as a Chase executive. (She also deals in Cuban and Fine Latin American Art.)

Adrian joined Chase in 1970 as the executive assistant to Jerry Johnston, president of its Edge Corp., when it opened in Los Angeles. After he left the bank, she transferred to New York, attending the management development program in the fall of 1975. Her assignments included corporate banking and trade finance in the Mexico City Rep office under Robert Chandler (1977-1981), Mexico corporate bank liaison in New York and corporate support for the Mexico Rep Office during the Mexican debt crisis. In 1984, she  was assigned to Quito, Ecuador, with responsibilities for converting private sector debt to Central Bank risk, working for Luis Palau Rivas. From 1985 to 1987, she served as Corporate controller for the Andean Pack countries, including Colombia, and executed special assignments under Robert Chandler. She decided to return to California when the regional office was closed in 1987.

“I originally became interested in Latin American art, in particular Mexican, as a student in Mexico City, where I received my BA in International Relations. I started to collect the art seriously in 1977, when I went to work for the Chase Rep office there,” Adrian said.  “As for the Cuban art, it started when I had my first opportunity to travel to the island, five years ago. I was astounded by the art I found. Yes, I know it is difficult to travel to the island, but I have been fortunate enough to travel under an OFAC (Office of Foreign Assets Control) license.  It is illegal to travel without a licence from OFAC, which is responsible for enforcing the Cuban travel ban. Licenses are becoming more difficult to obtain.”

Adrian’s importing their art affords Cuban artists an opportunity to have their work exhibited in the United States, which they otherwise would not have.

“Last year, Julio Cesar Pena, a Cuban artist friend, won first place for works on paper in a MOLAA competition, for his sensational hand-colored woodcut Aproiaciones indebidas (Wrongful Appropriations): Babalu-ay-e. It is now in the permanent collection of the museum,” Adrian said.

She hopes to return to Havana next year, but all depends on receiving permission to travel. “The architecture, although crumbling for the most part, is fabulous, as are the Cubans themselves,” she said. “While the economy and times may be difficult and uncertain, the Cubans always find an opportunity to enjoy life as best they can.”