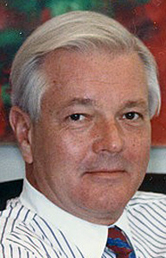 The CAA mourns the death of its member Robert Weaver on Friday, January 30, 2009, from cancer.

The memorial for Bob will be held at 4 pm, Saturday, February 7, 2009, in the Noroton Presbyterian Church in Darien, CT.  The church is on the corner of Noroton Avenue and the Boston Post Road.  A reception to which all are invited will be held at the Wee Burn Country Club in Darien, after the church servicee.

A resident of Darien for 38 years, he was married to Linda Nims Weaver. They raised their family in Darien and in London, England.

Born in 1939 in New Bedford, Massachusetts, he was one of two children of Helen and Robert Weaver. He attended Winchester High School, graduating in 1957, and then attended Lafayette College where he graduated in 1961.

Bob enjoyed a long career at The Chase Manhattan Bank, where he spent many years advising and financing automobile and energy companies. He began his career in the training program in 1961, and he retired from Chase in 1995 as Senior Vice President and Head of Global Petroleum.

One of Bob Weaver's passions was golf. He enjoyed playing the game, studying its history, and most importantly, cherishing the many friendships he made on the golf course. He was an active member of Wee Burn Country Club in Darien, and of The Royal & Ancient Golf Club of St. Andrews, Scotland. He was also an avid baseball fan, and he lived to see his beloved Boston Red Sox win the World Series, twice.

In addition to his wife, Bob is survived by his son Robert Nims Weaver and his wife, Susan, of Darien, and his daughter Sarah Weaver Hartigan and her husband, Albert, also of Darien. His five grandchildren Bobby, Michael, Peter, Charlie and Annabel were his pride and joy. He is also survived by his sister Dawn Weaver Leahy, who lives in Springfield, OH with her husband, William Leahy.

Please send you recollections (and pictures) of Bob Weaver to news@chasealum.org.

We were colleagues back in 1961. His wife, Linda , was a  classmate of Roz's. We worked together in Land Transportation and he followed me as District Executive of Land Transportation. Tom and Maryanne Reifenheiser put together a really nice evening at their housewith Bob and Linda , the Larrs, Haynes and Kruses about a month ago. Bob was obviously not well but appeared much his old self, so his death yesterday is a shock.

Bob Weaver will be missed by those of us who worked with Global Energy particularly during the Heritage Chase Years. Bob was loved by our global energy clients and opened many doors for Chase.  He will be fondly remembered.

The Chase alumni have lost a special member with the passing of Bob Weaver.  He was a classy guy, a fine banker, enthusiastic golfer, and a great friend of mine dating back to our days in the Credit Department in the early 60's.  At the Bank, he was a natural leader, looked up to by his staff, admired by his peers and respected by senior management for his ability to forge relationships and produce profits.

Bob was a fellow you just wanted to be around - for his knowledge of the latest Chase gossip, his firm opinions on currect events, and his unending supply of jokes no one had heard before.  He was an elegant co-host at many bank events we attended together, keeping our guests and colleagues in high spirits with his sharp wit.

I will miss Bob's friendship greatly, but will always remember fondly our many good times together.

Those of us who were part of the Global Mining Group during the many years Bob ran Global Petroleum know first hand not only what an accomplished professional he was but also knew him as man who could be counted as a fine friend.  I remember with great fondness many joint mining and petroleum events where Bob's warmth and engaging personality would light up the room.