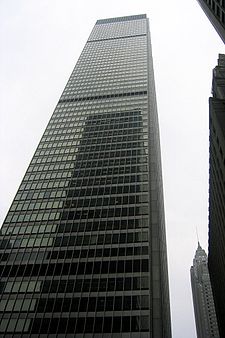 One Chase Manhattan Plaza, an aluminum-and-glass-skinned skyscraper between Nassau, Pine, Liberty and William Streets in Lower Manhattan, was designed by Gordon Bunshaft of Skidmore, Owings & Merrill and was the sixth-tallest building in the world when it was completed in 1961.

The building is built in the International style, with a white steel facade with black patterns just below the windows. It echoes the Inland Steel Building in Chicago.

The Chase Manhattan Bank president of that time, David Rockefeller, the current patriarch of the Rockefeller family, was the prime mover of the construction and the building's location, notably because many corporations had moved uptown, and the Financial District had languished as a result. One Chase Manhattan Plaza is currently occupied by the successor to the "Rockefeller Bank", JPMorgan Chase & Co.

"The building is an enormous steel-framed rectangle, 813 feet (248 m) high, containing about 1,800,000 square feet (167,000 m2) above ground level, with another 600,000 square feet (55,742 m²) below grade for a truck entrance, mechanical equipment rooms, vaults, a branch bank, and a cafeteria. On the facade are anodized aluminum panels, mullions, and column cladding. Aluminum was chosen because it was cheaper than stainless steel, and the manufacturer offered a long performance guarantee. The columns, nearly 3 x 5 feet (0.9 x 1.5 m) in size, stand 29 feet (8.8 m) apart on the long axis and project from the long façades of the building; on the short sides, floors are cantilevered beyond the columns."

"...When seen from a distance, the bank looks bulky among the slender towers of pre- Depression skyscrapers. Its surface can also appear obtrusive because the earlier building surfaces of brick and stone absorb light while Chase's aluminum and glass reflect it. Seen from ground level, especially from its principal plaza, the building is a commanding presence."Chase's tall rectangle is asymmetrical in plan, with the elevator and service core shifted off center to allow a 45-foot (14 m)-wide (14 m) clerical pool on the south and individual offices and a corridor 29 feet (8.8 m) wide on the north. These broad spaces are uninterrupted by columns, adding to the cost but producing about 6 percent more continuous space for desks."