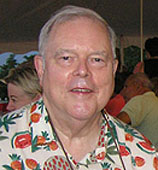 He is survived by his wife, Barbara, his children,  Rick, Mike, Lisa & Tony, "Papa" of Dakota, Morgan and Nate, and  a sister.  Born in Detroit, MI,  he raised his family in Larchmont, NY and then in retirement moved with his wife to Shoreham.

Dick served as a devoted volunteer and then president of Catholic Big Brothers NY, was a volunteer Group Club Leader with the Harriman Clubhouse of the Boys' Club of NY, was a Knight of the Equestrian Order of the Holy Sepulcher, and most recently was a well-loved leader with St. Mark’s RAP youth program.

In his career, Dick was a partner at Townley & Updike law firm, and served after Chase in the law department of Metropolitan Life Insurance. In retirement, he served his local community as Shoreham Village Justice.

In lieu of flowers, donations may be made to University of Detroit Jesuit High School.

From Peter Vermylen:  Dick was a kind and thoughtful fellow who had a long history of helping young people through Church-sponsored activities and organizations like Catholic Big Brothers of New York of which he was a past president. He was a proud and devoted father of four children and grandfather of three. He is survived by them and his beloved wife, Barbara.

From Fred Cohen: I worked with Richard at The Chase Manhattan legal department some years ago.  I have no specific anecdote to share but would simply remember Richard for the kind, courteous, caring, capable and considerate lawyer and human being he was.  I never knew him to express a mean thought or harsh word.  As a result, dealing with him professionally or personally was always a good experience.  He made the world and the Chase Legal Department better places to live and work.