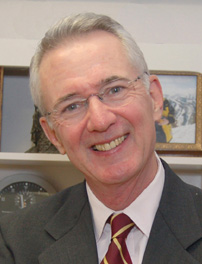 To Be Honored by New York Downtown Hospital

Bob Hunter will be honored on October 8, 2009 with New York Downtown Hospital's Elizabeth Blackwell M.D. Medal, for his leadership as a trustee from 1991 to 1999 and as chairman from 2004 to 2009. Elizabeth Blackwell was America’s first female physician and founder of the Hospital’s original predecessor, the New York Infirmary for Indigent Women and Children, in 1853. The Medal is the highest recognition afforded by the Hospital. Over the past decades, New York Downtown Hospital, previously known as Beekman Hospital, provided medical services to the Chase staff in the Financial District.

Bob was at Chase for 29 years. He joined the Global Credit Training Program in 1967 and was assigned to a number of developmental positions, including a two-year overseas assignment in Brazil, before being promoted to Director of Manpower Planning and Development for the bank.

He was based in London from 1977 to 1987, serving as Senior Chase Officer in Europe for wholesale banking, an antecedent form of investment banking, and, as of 1980, Area Executive of all European operations.  Africa and the Middle East were added to his portfolio in 1985.

Back in New York from 1987 to 1996, Bob switched to the retail area, beginning as Senior Vice President, National Financial Services, and becoming Executive Vice President, Consumer Financial Services, including all of the national consumer product activities of Chase, as well as all international retail operations. His work portfolio was responsible for $40 billion in assets, 8,000 staff and $250 million in earnings, representing 35% of Chase assets and 25% of annual corporate-wide earnings.

Bob left Chase in 1996 to become President of Standard and Poor’s Financial Information Services, where he was hired to rejuvenate one of the premier companies in the McGraw-Hill group. He developed a vision of pure product orientation around key customer groups and successfully initiated a series of new business development plans to stimulate revenue growth.

In 1999, he moved on to become CEO of Barclay Bank’s Private Client Group and lived once again in London. As a member of the Group Executive Committee, he helped organize and execute Barclay’s ambitions for the global affluent and high net worth markets. In four years at Barclays, he integrated six disparate businesses around a common strategy and consolidated operating and management structures.

These days, Bob is living in Sarasota, Fla., volunteering one day a week as a transporter at a local hospital, traveling to historic places in Europe with his wife, playing golf and loving baseball as much as ever.

Chase alumni are welcomed to join the 2009 Gala festivities of New York Downtown Hospital and congratulate Bob in person at Cipriani Wall Street on Thursday, October 8, 2009, or they can extend their congratulations in the Gala Journal. Please contact CAA President John A. Ward III at 646-479-7737 or Cora Fung, associate vice president for development at the hospital, at 212-801-1723, or by e-mail at cora.fung@downtownhospital.org.  You can also visit www.downtownhospital.org to reserve your tickets or make a donation to honor Bob.