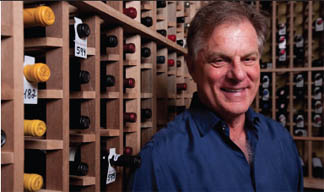 How many bankers have dreamed of some day opening a restaurant?

Frank Reider, who joined Chase in 1971 for the Credit Training program and worked for the bank for seven years in Brazil, has made it a reality with his 200-seat Gol! The Taste of Brazil in Delray Beach, Fl.  Gol! – which means “goal”, and can be an aim in life as well as a score in a sports game – is now one of South Florida’s leading Brazilian steakhouses.

Reider was first in Chase’s Rep office in Rio. He then moved to the commercial bank in charge of dollar lending and subsequently to corporate lending based in Rio. He left in early 1979, forming his own businesses, which included the 5-star Royal Palm Plaza Hotel and Racquet Club in the state of Sao Paulo, and a tourist magazine, which he published and edited.  In 1997, he sold his interest in the hotel company and moved to Florida because the climate was most like Rio; though Reider grew up in Westbury, Long Island, he and his family were not able to adjust to the cold after over two decades in the tropics.

He was an investor based in Palm Beach County for seven years before opening Gol!

"I was an active owner of the hotels but not in the restaurant part, other than the general guidelines.  My area was more finance and marketing,” Reider explained. “Gol! has been open almost three years and is much harder than any work  I have ever had in my life.  We had three restaurants in each hotel, but had a large staff.  There is no room for large staff at this moment in time and I am very hands on with Gol!  What I learned at Chase in analyzing balance sheets and cash flow has helped me in all the businesses I have been in, but the crucial areas are always more related to quality control and marketing; finance is or seems to be relatively simple in comparison.”

Gol! is a Rodízio-style restaurant, often found in Brazil and Portugal.  One pays a fixed price, and the waiters bring an offering of food to each customer at several times throughout the meal, until the customers signify that they have had enough.

Reider is currently working on a book about South American wines, many of which he serves at Gol!  “I was not a drinker until my mid-twenties, and even then I did not drink much wine.  I was pretty health conscious and athletic, so when everyone was partying I was too, but usually I was drinking Ginger Ale. In Brazil, I started drinking Caipirinhas and beer,” he said.

“In my mid-thirties, some of my good friends invited me to learn about wine,” Reider continued. “They drank very expensive French first growths, so it was very easy to love them and that became my favorite. Basically, that is what I drank until four years ago when I started to build the Gol! location and create the wine list.  I learned that the wines I was used to were out of the range of most restaurant patrons when you marked up the wines. “I then found the wines from Chile and Argentina, among others, and developed a taste for them.  With salespeople coming in almost daily, I was amazed with how many terrific wines there were in the market and at such great prices.  I made it my business to learn about them in depth and after almost four years, I became pretty knowledgeable.  I also noticed that although there are many articles about South American wines in magazines, there were no books on the subject.  One thing lead to another and I am finishing a book on the subject.  I will probably self-publish it as there is a large market for this book at the wineries I am writing about, as well as many bookstores with wine sections, and many Web sites and blogs as well.  However, I would be open to looking at any publishing offers or literary agents who may have some input,” Reider said.

He has had a number of Chase friends come into Gol! “Chase Alumni have a 20 percent discount on most nights other than the big holidays,” Reider said.  “All they have to do is mention they are from Chase and pronto!”

For additional information about the restaurant and the upcoming Vinofest (January 2010), see http://www.golthetasteofbrazil.com.