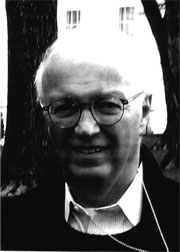 We're sharing the "note" that Bob McDonald wrote for the early 40th anniversary reunion of the June 1970 Credit Training Class.  Here's the story of his career, in his own words.

After “graduating” from Global Credit, I was assigned to the Soviet Bloc countries in New York, bought a home in Old Greenwich and, in 1974, moved to London to help build a syndications business at CML, Chase’s fledging Merchant Bank.  Credit training, while valued at CML, was upstaged by underwriting and distribution skills, an entirely different tack from the Global Credit regimen.  I began to wonder whether the intensity of credit training would ever be worth the effort.

Patricia and I thought the London assignment would be for two years.  Nine years later, in 1983, Patricia, Elizabeth (now 38, with identical twin boys living in Salt Lake) and Scott (born in London, now 34 with a daughter and three sons living in Connecticut) came back to Old Greenwich and built a home on tidal waterfront in Lucas Point, where we live today.

While still in London, I was named to the CML Board as an Executive Director in 1981.  Having led or been party to dozens of Euromarket transactions in countries to include the old Socialist Market, Scandinavia, Benelux, English-speaking Africa and even Iran, I authored International Syndicated Loans, the largest selling text of its kind, with over 6,000 copies sold and several printings through Euromoney Publications (1983).  Over the next 20 years, it was always gratifying to be with competing syndication specialists in London, New York or Hong Kong and find a dog-eared copy of the book at their desks.

I was back in New York by late 1983 and still part of the growing Investment Bank when Frank Stankard (whom I considered a valued mentor) asked me to start up a Merchant Banking activity covering Latin America, a task that took up the next six years.  The business model included debt trading, debt for equity swaps and advisory work.  No use of balance sheet.  It was simply fascinating to build business from scratch and in a part of the world that for me was a new experience.

Then the turning point arrived:  Tony Terracciano left to become President of Mellon, and Frank − and perhaps others − lost out to Dick Boyle, who became Vice Chair of the combined commercial and investment bank. There was huge difference from being on the team to off the field and on the sidelines: a Senior Managing Director without portfolio.

I hung around for nearly three years to see whether internally the course would reverse itself (it did not), and then took the VSP in September, 1990. That ended my Chase career but I departed the organization with transferable financial skills and a highly valued network of colleagues.

I left Chase on a Friday and on Monday joined First Interstate, a Los Angeles-based bank, in their New York office to work with several friends who were building an advisory/capital markets business. Technically, I was on a business trip for First Interstate that Monday at the World Bank meetings in Washington, DC.  I still had one duty left for Chase, so, as a First Interstate employee, I first put together a meeting to introduce Bob Murphy to the Swedish Ministry of Finance (a client whom I had been close to over the years), and then left the Chase meeting to join several First Interstate client meetings the same day.  A weird feeling.

It got even weirder.  Unbeknownst to any of the First Interstate staff in New York, the bank was in the process of selling its international business and merchant bank to Standard Chartered (SCB).  The rumors began to circulate nearly immediately and within several months we were sold to SCB.

So there I was: a banker with substantial experience in the former Socialist Market, with a specialty in the Nordic region, a bit in Africa and good background in Latin America, joining an organization whose franchise and interests were anything but these geographies. SCB’s footprint covered China, India, Southeast Asia and, more broadly, the Middle East and Africa, nearly all a mystery to me.  So I either had to leave SCB or remake myself.  I chose the latter.  Of the 500 or so First Interstate staff joining SCB in 1991-1992, there were fewer than a half dozen left by 1997.  In a remarkable turn of events within the organization, I was promoted to American CEO, the first U.S citizen ever appointed to the position in over 100 years of an American presence for this British bank.  As one Board member quipped, “At least McDonald is Scottish."

Building an organization from the top is actually easier than working in the trenches.  I will not go into great detail about the SCB years but rather share the outcome of a multi-year behind-the-scenes effort by dedicated staff.  We were in 7 World Trade Center on 9/11 and managed to exit all 473 staff to safety.  Moreover, by mid-afternoon on the 11th, SCB was one of the first banks back on line with the Federal Reserve and New York Clearing House payment systems through our well-tuned Disaster Recovery site in New Jersey.  SCB’s importance in the dollar clearing business was only known to professionals, and on that terrible day the staff’s performance and execution was nothing short of sensational.  I often relate 9/11 tales of personal and professional heroism involving SCB colleagues.

I was able to retire after 33 years in banking in mid-2002.  The farewell celebration was at a Group Leadership meeting in Shanghai, with gratifying recognition and reward for years as the American CEO and particularly the outstanding performance of the hallmark US dollar clearing business conducted in the midst of a tragic day.

During my SCB years, I had become a corporate member of the Council on Foreign Relations and dealt with several U.S. government agencies on a fairly regular basis.  Then a few months before retiring from SCB at age 59, I attended "Odyssey", a unique program at Harvard Business School,  designed and run by Shoshanna Zuboff, a leading scientist and adult physiologist. The program no longer exists but had been set up to deal with professionals aged 45-65 who chose to transition to an “out of the box career move” rather than retirement.  I can not go into course details in this note, but suffice to say the outcome pointed me to a career in the public arena.  As a result of a search that included government jobs, think tanks, foreign policy organizations and non-profits, several opportunities cropped up in DC, including Treasury and another agency.  As often, however, a third opportunity came out of left field: the American Red Cross, about which I knew virtually nothing.

The new CEO, whom I met by pure coincidence, was looking to bring in a management team that would include a new finance head.  The CFO position was essentially the "Mr. Inside" post in the organization and a partner to the highly visible Ms. Outside.  So there we were, transposed to Washington for what I thought would be a fairly cushy job for a couple of years.  We bought a small townhouse in Georgetown, kept our home in Old Greenwich and dove into a new career.  Patricia became a volunteer with the Republican National Committee and then at the White House for the second Bush term, adding an exciting dimension to the whirlwind of “life inside the Beltway”.

The “cushy” job was a pipe dream.  First, I literally reached back 30 years to my Chase training: The Red Cross, with annual, top line revenue that varied between $3-$6 billion, had no forecasting capability nor assumptions underlying any forecast nor any focus on cash flow or debt capacity, and did not perform any recession cash flow analysis (remember those terms?).  I could not forecast the organization’s liquidity position any more than 30 days in advance.  Second, the finance team was loaded with talented CPAs but no credit trained bankers, so I brought in two former Chase colleagues to keep me sane, Peter Mills and Tony Biddle. Both made outstanding contributions to the finance function at the Red Cross.

The wholesale remake in finance came about just in time, because Katrina changed the face of the organization – forever.  With basic finance tools in place, the Red Cross was able to tap a new $1 billion line of credit and had the confidence to rush funds to victims, prior to receiving public donations.  Our assumptions, forecasting and liquidity measures were sound, and Chase training and risk assessment underwrote this series of critical, time-sensitive decisions for the organization.  The intensity, discipline and value of the Global Credit training was worth it after all.

The two-year posting turned into five plus years as it took a long time for the organization to digest the changes wrought by Karina.  By 2008, it was time to pass responsibility for this legendary organization onto a new generation of Americans. I retired a second time, sold the house in Georgetown and moved back to Old Greenwich.

A nearly 40-year career that included international finance, humanitarian work and leadership positions at several momentous turning points has been an extraordinary experience that I could not imagine in June, 1970.

Patricia and I have been married for 42 years and are thoroughly enjoying retirement, with extended time to travel (just spent a month in Scotland) and the new career as active grandparents to six great youngsters.  I am also an advisor to the Greenwich chapter of the Red Cross and to the CEO of the American Lung Association in DC, and keeping my hand in foreign policy and national security issues though the Ambassador’s Roundtable, a group associated with the CFR and World Affairs Forum.  There is an occasional speaking engagement, most recently at Dartmouth’s Amos Tuck Graduate School of Business and the Men’s Association of Greenwich.  The subject was Katrina.

That is it. Over to long-deferred individual pursuits and projects, extended travel and always family.  Chase provided the foundation of all that was to follow, and I am forever grateful to the organization, its dedication to training, and the many friendships and great network that have been the result.