Cyrus K. Hui, who lives in Hong Kong and Beijing, worked for Chase in New York, Tokyo, London and Hong Kong from 1970 to 1984, in Finance/Capital Markets (corporate, merchant, commodities and trade banking).  Now retired, he is spending his time travelling and writing. His first book, The Tibetan Book of the Dead: A Novel, was published in February 2010.  It is a religious fiction/thriller on Tibet and Tibetan Buddhism. The book is available at Amazon.com, Barnes & Noble, etc.  Anyone interested may browse www.cyruskhui.com.

When in Lijiang in mid-November, Yunnan − itself a most popular tourist destination − I learned from a few locals that there is another river valley nearby that is even more remote and pristine: Nujiang ("Angry River"), which comes down from the Tibetan Plateau running parallel to and then into Burma to become the Salween, which drains into the Andaman Sea of Thailand over 1,700 miles. 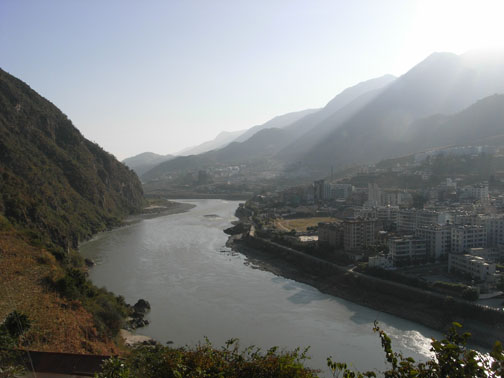 Nujiang is one of the three rivers that run through upper Yunnan, the westernmost province of interior China.  The Lancangjiang runs into Laos to become the Mekong, the sixth longest river in the world, covering 3,000 miles, and the Jinsajiang runs into the Yangtze River, the most important river running through China' heartland, covering nearly 4,000 miles. The "Three Parallel River" area, covered with deep gorges and snowcapped mountains, is the most bio-diverse in China, inhabited by 26 ethnic minorities, some remaining in near-aboriginal existence.  Their way of life, the entire habitat, however, are under great threat.

On November 28, 2009, I took off in a four-wheel drive vehicle with a couple of friends. Little had I suspected that it would take us three days to cover 500 miles, driving at times over unpaved, winding mountain roads to reach Bing Zhong Luo, the entrance to the "natural protected area", a World Heritage site.

With the village within sight, we are greeted by "Nujiang's First Big Bend", where the milky-blue river makes a 360 degree turn.

In the village, we locate Ding Da Ma ("Big Aunt Ding"), the old woman of the Drung tribe who is caretaker of both the local Catholic church and a popular B&B inn.  After a simple lunch of corn bread cooked over an open wood fire inside a low hung room that serves as kitchen-sitting room combined, we take off on a hike on the former 'tea-horse old road' − once used by the "horse gangs", trekking over a couple thousand miles from central Yunnan to carry tea into Tibet, Burma and India.  Now, it is a paved motor road.

Our next destination is Qiu LaTong ("Autumn Peace"), a village inhabited by a mix of Nu tribe and Tibetans, an eight-mile hike that turns into a six-hour trek over winding road along the Nu river. We are happy to reach the home of Mr. Yu, who is of Tibetan origin but converted to Christianity.  His home serves as a B&B for visitors.  We share dinner over an open wood fire with three fellow travelers, drinking tea and white liquor, chatting happily late into the night. Conditions are most primitive − an outhouse for convenience, no running or hot water for baths.

The next morning, we go back to the bridge crossing that is the beginning of a section of the "tea-horse old road" carved out of vertical rock cliffs, a hundred feet above the swift-running Nu.  After an hour's gentle hike, we reach Wu Li ("Misty Lane"), a small village perched on a gentle slope over the Nu. We find the house of Mr. Luo of the Lisu tribe, retired from more than 30 years of teaching in which he has helped educate more than a thousand children, now scattered all over the valley.  His daughter-in-law, a Tibetan converted to Christianity, cooks us a meal of rice, potato and eggplant − all organic, of course. 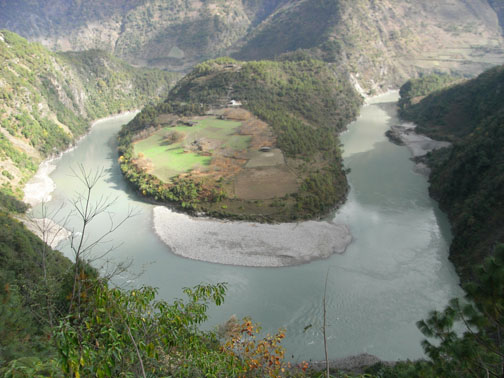 In the afternoon, we drive up a steep gorge of one of the tributaries where a dam is being built. This is one of the poorer areas due to a shortage of farmland. We visit a school for young children, grades one to three. Of the 120 school children, 90 are

"boarders", as their homes up in the valley are too far away for daily commuting. The country has implemented compulsory, free education of nine years, including free boarding. The children, as best as we could see, are adequately fed and dressed, healthy and happy. 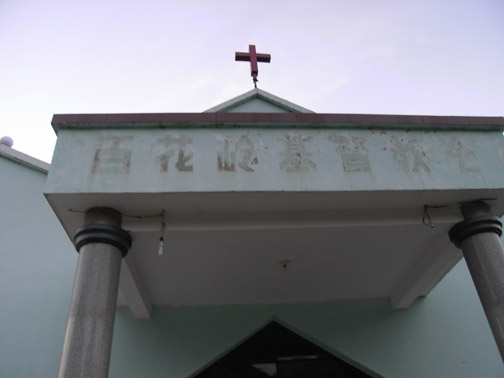 It is another two-day drive to reach Da Li, where we spend two more nights, then taking a bus to Kunming, the capital city of Yunnan, ending our most memorable tour.

Some of the salient points that impressed me the most:

But there has been trouble in this paradise since 2004, with the entire "Three Parallel Rivers" area under threat by construction of big dams for hydropower.  Due to inundations caused by the big dams, many indigenous inhabitants have already been dislocated and now live in dire poverty, as they have been deprived of their means of livelihood, farming and animal husbandry.

Tiger Leap Gorge on the Jinsajiang, a world renowned canyon within the World Heritage site of the Three Rivers, is now under threat of inundation by a big dam that is planned downstream.  If the construction of these big dams is allowed to proceed, they could dislocate up to 100,000 indigenous inhabitants, mostly ethnic minorities, and the habitat and its biodiversity risk destruction.