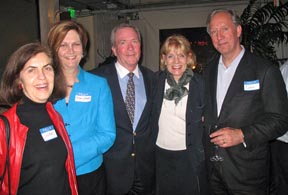 The San Francisco Bay Area chapter of the Chase Alumni Association kicked off the new year with its first get-together of 2010 on Thursday evening, January 7th, at Sens Restaurant, just a few feet from the Embarcadero office complex where Chase opened its first West Coast offices in the 1970s. There is even a Jean DuBuffet sculpture just below the restaurant to remind us of our heritage.

There was a large turnout to hear Susan Garner, President of Chase Middle Market Banking, speak to us about Chase’s activities in California and on the West Coast in general. Susan’s excellent presentation and the lively discussion that followed were much enjoyed by all. Our group later broke into informal groups for discussion, networking and political gossip.