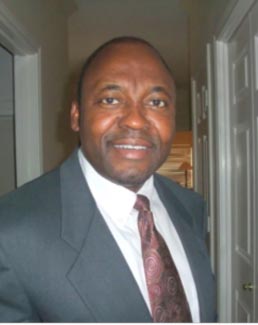 Author and a New Business Venture

There's a joke about engineers, which either speaks to their exactitude and resourcefulness or their realism: Ask the engineer if the glass is half empty or half full, and he'll say it's twice as large as it needed to be.

Ambrose Akpotaire, who was a software developer and manager at Texas Commerce Bank and Chase in Houston and MetroTech, Brooklyn, for 12 years, originally came from his native Nigeria to study petroleum engineering at Texas A&M.

He clearly has an engineer's resourcefulness, with an entrepreneurial flair.

After college, Akpotaire worked in the petroleum industry for seven years, till an industry slump in 1985, much like the one that has hit information technology today.

So Akpotaire decided to start a business in Houston – Dial N Dine, for delivery from local restaurants to individuals at home.

"Remember, this was before we even had Windows or the Internet," Akpotaire said. "We needed to try to automate and find a way to deliver orders to the restaurant, instead of calling in each one. So I taught myself software."

"I didn’t plan on being a consultant," he continued, "but I read that Compaq was having problem with its worldwide manufacturing software.  I realized that the solution was similar to something that I had developed.  They hired me, and I was
able to help move Compaq forward, and became a consultant."

He moved to the banking sector, leaving Chase in 2008.  "Working at JPMorganChase is great, but like all good things, it will eventually end for each person.  The current high unemployment rate made it quite a challenge to find other employment," Akpotaire said.  He did volunteer work for several organizations and still volunteers at Executive Services Corporation of Houston (ESCH), which provides free to minimal cost services to other non-profit organizations.  These include setting up accounting, computer systems, corporate structure and governance.  ESCH also offers training in all these environments.  "I've  also mentored University of Houston IT students as they wrote software for various non-profits.  This has been very rewarding," he added.

But with a wife and four sons (one in the Army, who has served three tours in Iraq and is awaiting another overseas deployment; one working in Dallas; another studying at Rice University, and the other still at home), full-time volunteering wasn't a post-Chase option.

So now he has started a business and written a book, Common Software Development Mistakes Made by Managers and Developers, which is available through Amazon.  The book draws on Akpotaire's 23 years of software development experience.  "My dream is that everyone gets a copy in order to avoid all the avoidable mistakes that lead to project cancelations, poor quality software, business disruption and high technical support cost," he said. "The audience for the book includes CIOs, managers and developers of all kind of software.  It isn't specific to any language or database."

The new business, Crystal Seed, LLC (www.go2quality.com), is centered on lessons contained in the book. "The core service is code review.  This often left out function can make the difference between failproof software and bug-full software," Akpotaire explained. "Quality is something I’m also passionate about."

At Chase, for instance, the software he wrote ran eight years without a problem, running 24/7, a feat in which he takes great pride.

He thinks the book fills a real gap.  "There are books on Sigma and CMM  ways of producing quality, but none really goes into the nitty gritty about software that makes it error prone," he said.  "Industry comes up with deadlines for when software has to be done before they know what it will take to get it done.  It's better to have a quality product than one that was rushed and is not working. You would think it is intuitive, but the forces at play make it not that way."

"I remember a couple of years ago when one of the major airline's baggage claim operation didn’t function, all because of a software glitch.  It cost them a lot, including the illwill of passengers," Akpotaire recalled.  "Now you cannot avoid every software glitch, but software should be able to pinpoint what’s wrong, so that staff can identify the problem and fix it in seconds.
'Fatal error' doesn’t tell you anything."