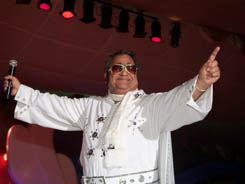 When Surinder Singh was growing upin Delhi, he recalls, there was no “follow your dream” mentality.

He’s making up for it in his retirement.

Singh, who worked for Chase from1974 to 1989, and retired as president of Fidelity Investment’s FMR India in 2008, is now pursuing two delayed dreams ­­– of being a writer and, but of course, an Elvis impersonator.

Since November, he has been publishing a very personal blog about life after retirement, at www.secondchancesblog.com, and he’s about to launch www.kingimpersonations.com, through which he’ll offer his Elvis act gratis to nursing homes and senior centers.

Singh was an English major in college.  “When I was young, I wanted to set the world on fire with my words,” Singh recalled.  But summoning Thomas Gray’s “ElegyWritten in a Country Churchyard”, Singh recited, "Chill penury repressed their noble rage, and froze the genial current of the soul.”

That is, he joined Citibank.  He worked for them for six years andwas about to attend their credit training course in New York when a friend suggested he interview with Chase while in the States.  He did and was soon working for Chase in Beirut.

Most of Singh’s career was spent in International, primarily in operations-related jobs, with time spent in Spain and Hong Kong, and two years in the credit card business stateside. Singh explains with his charming Delhi accent that, given that he has spent most of his life in the United States, hisson and daughter often remind him, “It’s okay to live with an American accent.”

After Chase he moved to the Boston area when he worked for Fidelity Investments, until he moved to Bangalore for three years to run FMR India.

“Bangalore is just a teeming city,” he said.  “It used to be called the Pensioner’s Paradise, when its population was a half million. Today it is eight million, with world-class traffic jams.”

Singh was responsible for 6,000 employees in India.  Like many Indian companies, FMR India held an annual “family” day, to which employees and their parents were invited.   “All day the building is open, and then at night we have an ‘intergalactic’ event, with nearly 8,000 people attending.  All the executive managers put on a show to entertain employees,” explained Singh, who “did” Presley for his employees. “I’ve been an Elvis worshiper for a long time.  Yes, in the picture I’m in my own personal jumpsuit.”  His favorite number? Heartbreak Hotel.

Did Fidelity know about this special talent when they hired him?

“If they didn’t know when they hired me, they sure discovered it,” he said.

Singh thought about moving in retirement to Boston, where his daughter is a private school teacher, but he and his wife  – who worked at Chase under her maiden name, Nancy Turner ­– moved to the Seattle area to be near her ailing elderly mother.

“I feel as though I’m in the movie Meet the Fockers, with Nancy’s family here. We’d never visited for more than a week or 10 days. Living here is a whole new story,” said Singh with his characteristic hearty laugh seemingly tinged with a tacit “read between the lines.”

“Retirement is significant. You have a chance to do thethings you haven’t done before,” he said.

“You have to think hard about where you want to live and what you want to do. I downsized emotionally for a year, during which the bes tpart of the day was spent making French press coffee and reading The New York Times cover to cover.”

He began his blog in November 2009 and figures on writing new posts two to four times a month. Here’s how it started:

Why a blog you may ask? Good enough question, the answer to which is rooted in juvenile innocence from a time gone by, before the reality of economic necessity progressively infiltrated my dreams. I was going to be a journalist with a social conscience! Yeah...right! Why is a first ambition rarely fulfilled? Mull it over, think about what it was that jiggled your passion in the early days...rocker, ballplayer, super bowl quarterback, mad scientist, celebrity actor, Elvis impersonator...whatever! Did not happen, did it? Well, maybe for some but nobody I know.  Before you start muttering to a skull while riding around your Danish castle in despair, I offer you this redemption...when you hang up your proverbial professional spurs, second chances will come your way. This month, my self imposed twelve month post retirement sabbatical expired and I am about ready to hit the ‘Publish Blog’ key on my MAC. This then is my second chance.

Milestones in life...often called Passages. Birth, of course, takes its logical place at the head of the queue, followed by the 13th birthday, voting and driving in reverse order at 18, legal drinking at 21, turning 25 for no reason other than it feels like adulthood, marriage, parenthood, empty nesting, and then there is Retirement, preceding the ultimate passage...Mortality! Sorry...forgot losing one’s virginity! It is true what they say...retirement ain’t a snap. So you figure...I made my calcs...got the money thing sorted out...no more boss...the passport is current...health is sort of okay...I am ready! Not so fast...welcome to the prequel...the decompression chamber! When I hung ‘em up...the one year moratorium...best thing I ever did! If you are retired already, you will  recognize my vignettes as your own and if you are not, pay attention...it might just improve the last quartile of your life!

Some samplers for you. The search for the perfect martini or the libation of your choice...choosing and bonding with your bartender...watching Iron Chef on the Food Network with your spouse...finding your feminine self through cooking lessons at Sur La Table...loading and emptying the dishwasher...learning to use the clothes washer and dryer and the science of folding fitted sheets...etc...etc. Especially watch for the post focused on the day you surprise your wife sharpening her Wusthof knife collection in the kitchen...it could save critical appendages!

Singh is also thinking about teaching management courses, even if without compensation, as an adjunct lecturer.

Lest retirement be dull as Elvis, a blogger and professor, there’s also a possible publishing project with his sister, a very well known cook inIndia.

“She has suggested writing a book about families through theoccasions that bring them together over food.  We would publish menus and recipes for each occasion,” he said, laughing again. “She’s the better cook, I’m the better writer.”