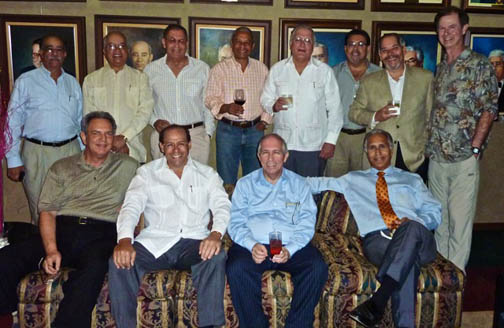 On February 5, 2010, Francisco Rodriguez, former Chase VP, hosted a cocktail reception at the Santo Domingo Country Club in honor of Phil Young, former Country Manager for Chase in the Dominican Republic, who was visiting the country with his wife, Cindy.  The event was attended by 11 additional former Chase officers who contributed to the success of the Chase's performance in the Dominican Republic in the late 1970s and 1980s.

On February 6th, Phil and Cindy Young, along with Francisco Rodriguez, visited Eduardo and Emma Fernández at their home in Santo Domingo. During his tenure as Country Manager, Phil conducted bank business with Fernández, the Governor of the Central Bank, and Cindy taught the Fernandez children at the local American school.

Young, who now lives in Las Vegas, worked for Chase from 1970 to 1983 in the United States, Hong Kong and Mexico, in addition to the Dominican Republic, in finance and capital markets.