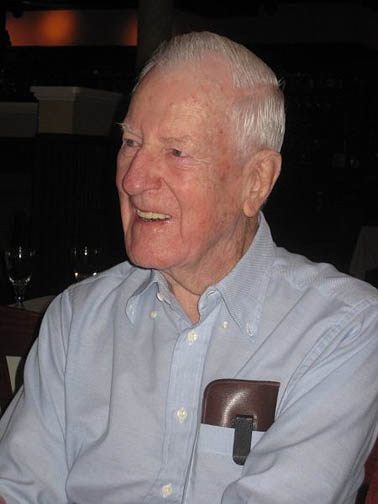 The CAA's Oldest Member (We Think)

In Spring 2010, some of us are watching history retold on the HBO Series The Pacific – a 10-part story of the First Marine Division that landed on Guadalcanal on August 7, 1942.  Chase Alumnus Ernest F. Gustavson doesn't need to watch the movie: He was there.

In 1937, Ernie, a recent high school graduate from West Orange, NJ, joined two great institutions: The Chase National Bank in New York City as a page, and the U.S. Marine Corps as a reservist.  He was called to active duty in 1940 and made three landings in the Pacific.

Ironically, Ernie's Chase banking career took him full circle and back to the South Pacific and Australia.  After 40 years in the Domestic Bank, he was ready to retire.  Prior to making the passage to his new life on the golf course he "un" retired.  Ernie transferred to Melbourne in 1979 for the last four years of his 46-year banking career.  He retired for the second time in 1983.  He may be the oldest member of CAA and among the leaders in terms of service and tenure at Chase, starting as a page and retiring as a vice president.

Ernie returned to the States in 1944 as a Master Sergeant and moved to Philadelphia with his new bride to supervise the main warehouse of the Marine Corps depot in the Philadelphia Navy Yard.

At the end of the war, he re-interviewed for a position at the Bank.  Ernie joined Trust Operations in January 1946, retaining his original start date of employment in 1937, and moved with his wife to her family's home on Long Island. It would take a few years for temporary housing for vets to be built.  Ernie and wife Charlotte moved to New Jersey when housing became available.  It was 1955 when the Gustavson family purchased their first home in New Providence.

Brooklyn-born Ernie, son of Swedish immigrants, had graduated from the first-rate West Orange (NJ) High School, but had not had the money to attend college.  In the late 1930s he'd tried attending Upsala College by day and working at Chase at night, but then he was called to active military duty. Back from the war, he enrolled in the Chase training program (completing all courses but credit training, since someone wanted him for a correspondent banking assignment when that section was being offered).  Over time he picked up courses at the American Institute of Banking and similar schools.

After the war, the registrar and transfer agent functions were staffed by returning veterans. The Department occupied one large room; the vets formed teams, re-engineered the workflow and established competitive goals.  The Bank consisted of 22 branches in Manhattan, with two in Queens and one in the Bronx.

Ernie, joined by WWI vet Charlie Spangehl and WWII vet Herb Vincent, formed the American Legion Chapter at Chase National Bank in 1946.  "It was a fraternal organization, doing charitable work, helping other vets in need.  At its high point, we had up to 500 people from the greater New York area," Ernie reminisced.  "We did some parading on national holidays.

"I was installed as first commander, at the ex-Treasury Building at Wall and Broad streets," he continued.  "I dropped out after a few years when I began traveling too much."

At first, Ernie worked with the executive who established the Chase credit card system.  Then he went back to correspondent banking, where he essentially saw himself in customer relations and sales, trying to develop business for the bank – calling on insurance companies, lending companies and correspondent banks. First he worked the New England territory, then transferred to New York-New Jersey-Delaware, a larger territory with greater financial impact.

In the 1970s, the Bank moved to a line of business organizational focus.  Correspondent Banking evolved to Financial Institutions in the United States.  Several years later the Bank would organize International Institutions.  These two "new" sectors would place Ernie's career into overdrive.  He was promoted to Vice President and was the team leader for our FIs in New England – followed by the addition of the Mid-Atlantic States.  While FIs had traditionally relied on Money Center Banks for services and overnight funding, the product offerings were expanding to longer term credit to banks and holding companies.

Ernie fostered an environment where his long-standing relationships would be leveraged to include lending products.  He set the stage for Chase to develop larger, deeper and more profitable relationships with the bank holding companies, where Chase was now offering term loans for non-bank acquisitions, primarily finance subsidiaries in new markets for these banks.  Ernie's strength of customer relationship, coupled with credibility with Jack Hooper, Palmer Turnheim, et al, led his team through tough questioning as the Bank launched term lending.  Simultaneously, Chase Corporate Development was looking over his shoulder, seeing the potential for mergers with market dominant regional banks.  These were busy times for Ernie, who was entering his fourth decade at Chase.  His ability and skill to lead the next generation of bankers were not learned in a classroom; the Master Sergeant experience and leadership were evident to people, and many sought to emulate it.

While Ernie was deciding whether to retire in 1979, I invited Ernie to return to Melbourne as the manager of Chase's FI relationships in Australasia. This was a major change after a career in domestic banking.  By now he was ready for more time for golf and his grandchildren.  At the same time, he understood the need for experienced, mature bankers to deal with the FIs in Australia, New Zealand and the Pacific Islands.  After his arrival and initial calls with clients, the business opportunities were apparent to this experienced banker.  Based in Melbourne, he cultivated and renewed historic Chase relationships with the five national banks.  Simultaneously, he launched new business with the state banks.  New Zealand was next and commutes to Wellington reopened business opportunities there.  After four years and a batch of air miles – unfortunately before the advent of Frequent Flyer Miles – Ernie elected to return to 1 CMP for the final months of his long banking career.

For these past 27 years, Ernie has enjoyed his status as a "Vested Vulture" living in Port St. Lucie, Fla., surrounded by golf courses and many friends he has made along the way.  He continues to play the game albeit on the Par Three course now.  He is activity coordinator of the WOWs – Widows or Widowers – a group that attends social events throughout the year centering on golf and travel for the enjoyment of its 28 members (mostly women...and Ernie still drives!).  He is also a charter member and key participant in ROMEOS – retired old men eating out.  As an original founder of these two organizations, he offers consultation and advice to all who want to form local chapters.

Ernie's wife Charlotte passed away in 1974 after 30 years of marriage.  They met while both were working at the Chase National Bank in 1938 and were married in 1944 when he was on leave from the Marines.  Ernie's second wife, Momikai, passed away in 1999 after 23 years of marriage.  Ernie was introduced to Momikai in 1976 by Barbara Wick, the wife of his customer Hilton Wick, president of Chittenden Trust Company, Burlington, VT.  Barbara owned a ladies' clothing store in Vermont and was a client of Momikai, who was in the ladies' clothing business in New York.  In the 1950s Momikai had been a Hawaiian dancer and singer at the Hawaiian Room of the Hotel Lexington and appeared as a regular on the Arthur Godfrey television show.

For his 90th birthday last July, his two daughters – Susan and Joan – sons-in-law, four grandchildren and three great grandchildren all joined him in Florida to celebrate this milestone.

Ernie attended the CAA weekend in New York City in 2004.  John Ward introduced him as the oldest alumnus at the event at 1 CMP.  He made the trip that weekend to Pocantico Hills, meeting David Rockefeller, with whom he had traveled in his correspondent banking days at the bank.

Recently he attended the CAA event at GOL! Taste of Brazil in Delray Beach. Thankfully he continues as the oldest alum at this event.  We would like to see him again at future CAA NY events, but he likes to stay close to his home these days.

"I have a couple of leaky heart valves, angina, diabetes – discovered only three years ago," Ernie will tell you.  But the secret to his longevity?  "Just luck.  Getting through the war itself, even.  That was just luck."