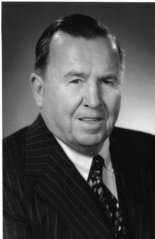 John G. McCoy, the banking innovator who transformed the smallest bank in Columbus, Ohio, into the national powerhouse Banc One, died in his sleep on Easter Sunday, April 4 2010 at his home in New Albany, Ohio. He was 97.

As Banc One's CEO from 1958 to 1983, Mr. McCoy increased the bank’s assets from about $140 million to $8 billion, and in 1979, Banc One ranked first in profitability among the country’s 100 largest bank holding companies.

A 1991 article in The New York Times described Banc One, then under the management of Mr. McCoy's son John B. McCoy, as the best-run bank among regional powerhouses and “perhaps the best bank in America.”

During the son’s tenure, Banc One became one of the country’s largest banks after acquiring First Chicago Bank for $21 billion. After the merger, the bank moved its headquarters to Chicago. John B. McCoy resigned in 1999 after the bank had earnings shortfalls. Jamie Dimon was hired as chief executive in 2000.

JPMorgan Chase – by then led by Dimon – bought Banc One in 2004. Chase later changed the name of its two-million-square-foot corporate offices in Columbus to the McCoy Center.

Early on, Mr. McCoy identified growth opportunities for his bank in consumer-friendly customer service and in acquiring other banks.

In the 1950s, for example, when many people still received their salaries in cash and banks often had only one office, Mr. McCoy began building branches and had them open on weekends.

Banc One was also an early adopter of services like drive-through banking, A.T.M.’s, credit cards and debit cards.

But being an early adopter didn’t always pan out. Before the era of online banking, for example, Banc One tested in-home banking via set-top boxes connected to televisions. But customers weren’t ready for such technology.

Banc One also invested in information technology research, earning a reputation as a leader in data processing. By the 1980s, the bank was processing credit card transactions for dozens of other banks.

But Mr. McCoy had conservative lending policies, courting smaller companies instead of the country’s biggest corporations.  “He used to say ‘I’d rather make a thousand loans for $1,000 than one loan for $1 million,’” his son recalled, “because no matter how good you are, you are always going to have one loan go bad.”

His father was an oilman and banker who moved the family to Columbus in 1930s after the governor of Ohio asked him to supervise the closing of banks that had failed during the Depression. In 1933, his father became president of City National Bank and Trust.

John G. McCoy attended Marietta College in Ohio. He also graduated from the Stanford Graduate School of Business with a master’s degree in business administration.

In 1958, after his father died, Mr. McCoy became president of City National Bank. He changed the name when he created a bank holding company that became known in 1979 as the Banc One Corporation. But the bank’s branches, like Bank One Columbus, used a “k” in the name.

Anyone wishing to leave a reminiscence of Mr. McCoy should send it to news@chasealum.org.

From Ken Jablon: In the early 1970's, I worked for Payments Systems Inc., a research and consulting group specializing in consumer electronic banking. Our clients were all of the major banks (like Chase) but also a relatively small bank (I think it was called Columbus National Bank) which was John McCoy's bank. I met him, and his son, at a few of our conferences. He, and his bank, were more advanced in credit/debit cards, cash dispensers (ATM's did not exist), etc. than most of the large banks (definitely more advanced than Chase). At one of the conferences, he presented his banks program (the first in the country) of "vestibule banking,", i.e. cash dispensers inside the vestibule of a number of his branches that customers could enter, when the branch was closed, with their debit card instead of getting cash on the street. I asked him why a relatively small bank would spend this amount of money on an untried idea. He said that he knew that this was a major benefit to banking customers, and therefore they would come to his bank and stay as customers in the long term.