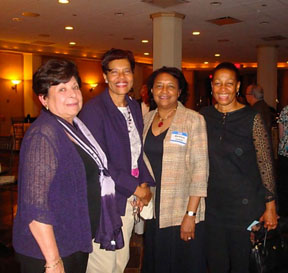 The third annual reunion of the Chase Bronx, Westchester and Mid-Hudson Division was held at the VIP Club in New Rochelle on Thursday evening May 13, 2010. The VIP is owned by Chase Alum Mike Morelli, who pulled out all the stops to make all his former Chase colleagues and friends welcome.

We were delighted to have Eileen Phillips and Florence Tronconi with us this year. Eileen now lives in Florida but made it a point to visit her daughter, Patricia Philips Hoenniger (also a former Chase employee) in Connecticut at a time to coincide with the reunion. Florence Tronconi convinced her friend, Helen Granskog, to accompany her to the event. It was great seeing them both reminiscing on the great days and sometimes crazy days we had at Chase.

We were also delighted to have Mike Galvin with us this year and Dottie Altieri. We also pleased to wel-come Jim Minty to this year’s event. Although Jim never worked in the Bronx/Westchester Division we all interfaced with Jim during his days in Operations. Nancy Maher worked with Jim over 25 years ago in Manhattan, and it was great to hear them reminiscing on the various folks they worked with during these bygone years.

It appeared everyone wanted to roast Frank Altieri on the inventory of Chase give aways Frank always stored in the trunk of his car. Ken Jablon led the unplanned mini-roast, followed by Bob Gottschall, Helen Durkin and Jim Wertheimer. Frank's wife, Dottie, ended by saying, "You should have seen our basement!” Everyone agreed, however, that Frank brought a tremendous amount of business to Chase.

Anyone who wants to be added to the invitation list for future reunions or to receive electronic newsletters from the division should write to Chasereunion@aol.com or call Helen Durkin at (914-337-7527) or Evelyn McSweeney at (718-969-0633).