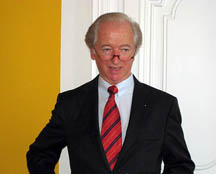 Michael Kraus gave a presentation on Free Masonry in his capacity as Past Grandmaster of Austria and author of a recently published book on the subject. His excellent presentation was followed by a lively discussion.

This event was unfortunately overshadowed by the sudden passing of Ossi von Goertz on March 22nd. Ossi was one of our most loyal members; he never missed a Chase Alumni event, and we will miss him dearly. Our thoughts are with his wife, Gisi, and his two sons,  and we expect many alumni to attend his funeral on April 13th. Respecting Ossi’s wish not to send flowers, the Chase Alumni Association Austria, as well as several alumni in Austria and Germany, has made a donation to SOS Village d’Enfants.

The next chapter luncheon will take place June 23, 2010 at St. Johanns Club.